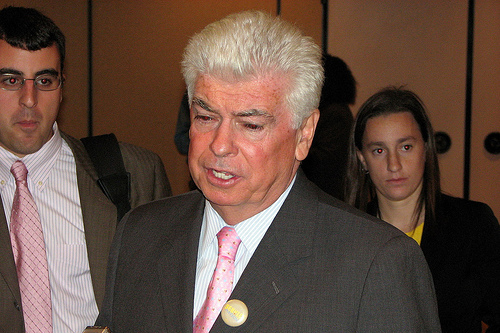 Connecticut’s embattled Senator Chris Dodd has had a bad year. The democratic chairman of the Senate Banking Committee has been attacked for his ties to economic villains like Countrywide Financial and AIG, and is often cited as one of the most vulnerable Dems seeking reelection in 2010. Hoping to thwart some of this criticism, Dodd reportedly said this spring that he would donate gifts he received from a dozen AIG executives and their spouses to charity. But this week the Center for Responsive Politics reports that thus far, Dodd has neglected to donate the $56,000 in question and that he’s even backing down from his original promise. Dodd supporters claim that that he only intended to return funds he received from AIG executives following the bailout. “Sen. Dodd has taken no AIG contributions after the bailout, and in fact, none since September 2008,” Connecticut Democratic Party Communications Director Colleen Flanagan told CRP’s politics blog Capital Eye.

True, Dodd shouldn’t have to make up for money he received before AIG went asunder, but if he didn’t get any post-bailout funds then why promise the donations in the first place? This, more than anything, gives amunition to Dodd’s critics, including a cohort of Republicans, eyeing his seat in 2010.

So what did Dodd actually promise? CRP rounds up press reports from earlier this year:

On March 21, from the Hartford Courant: “Dodd has said he would return all campaign contributions from AIG and its employees.”

On March 24, the Connecticut Post reported that Dodd would “go through his list and give back or donate to charity contributions linked to bailout money.”

The Post further quoted Dodd saying, “I don’t want those contributions,” in reference to any contributions tainted by the AIG scandal. Dodd also said in the article that prior to the last year, AIG was a “solid and well-respected company.”

On March 30, Dodd spokesman Bryan DeAngelis said, “Contributions received from any individual who accepted these bonuses from AIG last week will be donated to charity,” according to the Washington Times.

As the Center for Responsive Politics reported Thursday, during the first nine months of this year, Dodd contributed $23,500 to charity—none of which was related to previous contributions from AIG employees.

As Dodd’s 2010 reelection campaign heats up, his top challengers, including former congressman Rob Simmons and former WWE CEO Linda McMahon will continue to emphasize Dodd’s connection to AIG and Washington culture. And to Dodd’s dismay, those connections are plenty.