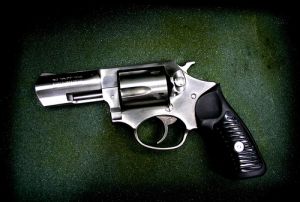 Used through a Creative Commons License from Flickr user Mborowick

Colorado State University is one of the only universities in the country that allows concealed weapons on campus, but public safety experts and the university president’s advisors think its about time for a gun ban, the Denver Post reports.

Following state law, the school’s policy allows someone carrying a concealed weapon to bring it almost anywhere on campus, residence halls excluded. But in spite of calls for a ban, students are lobbying their university president to keep the school’s gun policies as they are. “I think really it’s an issue of if it’s not broken, why fix it,” Matt Strauch, spokesman for the Associated Students of CSU, told the Denver Post.

Twenty three states allow public colleges and universities to decide on their own weapons policies, but almost all of them chose to be “gun free,” according to the American Association of State Colleges and Universities. Along with CSU, a few other schools that allow concealed weapons on campus include Virginia’s Blue Ridge Community College and Michigan State University. Utah is the only state that prohibits public institutions from barring guns on campus.

Students against the ban drafted a formal proposal yesterday in favor of maintaing the school’s current gun policies, arguing that most shootings on college campuses take place at schools with bans on concealed weapons. A gun ban would leave students defenseless against the threats of rape, robbery, and assault, the proposal states.

CSU faculty council chair and physics professor Richard Eykholt says encouraging students to respond to a campus shooting with more gun fire creates the unecessary opportunity for more bystanders to get hit with additional flying bullets. Plus, perpetrators in school shootings are determined to kill themselves and others, he told the Denver Post. “I don’t think they’d be deterred by threates of anyone having a gun.”

A Congressional vote this past summer indicated that some politicians in Washington may agree with the CSU faculty. In July, the Senate voted 58-39 to defeat an amendment to a military spending bill that would have allowed concealed weapons carriers to bring their guns across state lines. The measure would have forced states with tough gun laws to accept gun-toting visitors from states with weaker laws. Check out David Corn’s post on the topic for more about the vote.