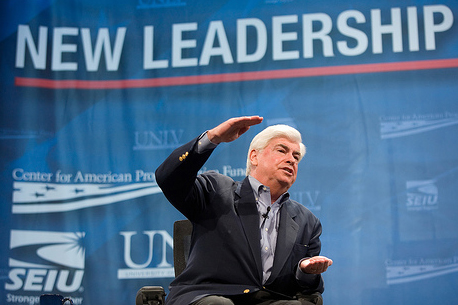 Senator Chris Dodd’s re-election prospects have been upgraded from “Toss-up” to “Leans Republican” by well-respected elections predictor the Cook Political Report. Cook editor Jennifer Duffy acknowledged that the prediction is an unusual move for the publication this early in the cycle since incumbents generally catch up once they start campaigning actively. But she made an exception in Dodd’s case, writing that the Connecticut Democrat is “as unelectable as unindicted incumbents get.”

She’s not exaggerating. According to a recent Rasmussen poll, Dodd trails his toughest opponent, former congressman Rob Simmons, by 13 points (48% Simmons, 35% Dodd). And in a match up with former WWE CEO Linda McMahon, Dodd trails by six points. Both Simmons and McMahon have a lot to slam Dodd for, from his connection to financial arch-villains like Countrywide Financial, to his refusal to give up campaign gifts from AIG executives, who later received staggering post-bailout bonuses courtesy Joe TaxPayer.

So will Dodd step down? Duffy writes that “Democratic leaders have reached a similar conclusion, the question is how public they have to get before Dodd takes the hint that it is time to exit the race, and how messy the situation becomes.” Most Democrats holding elected positions in Connecticut have said they will support Dodd. But if he decides to retire, you can expect those same Dems, well-known and obscure, to embrace the move whole-heartedly to welcome a stronger Democratic candidate.

Here’s a list of Democrats who could save Dodd’s seat from a Republican takeover: It would be pretty surprising if Ned Lamont passed on this one. Lamont is best known for his 2006 primary victory over Joe Lieberman, prompting the moderate senator’s departure from the Democratic party. The anti-war entrepreneur has been widely rumored as a candidate for Connecticut governor. Secretary of State Susan Bysiewicz recently announced her intention to run for Governor and launched a campaign website. Polling numbers show Bysiewicz with a slight lead over Lamont if the Gubernatorial primary were held today. Either candidate could reasonably opt to run for the Senate instead.

As Connecticut Attorney General for the past 20 years, Dick Blumenthal has made ripples most recently for his harsh words about financial badboy AIG, which has offices in the state. Back in March, Blumenthal called the legal justification for AIG bonuses “a joke of a justification for squandering scarce taxpayer resources.”

In her tenth term as a representative for Connecticut’s third district, Rosa DeLauro would be one of the most experienced candidates. The Chairwoman of the Agriculture-FDA Appropriations Subcommittee, DeLauro has been a reliably liberal voice on food and health care issues.

A sixth term Congressman representing Connecticut’s first district, John Larson quickly became the House’s fourth highest ranking member. A former teacher and insurance executive, Larson has been an outspoken critic of the Iraq war from the beginning and proposed in 2007 that Congress rescind the president’s war powers.

Small-business owner Merrick Alpert‘s political experience is limited to some political organizing in the early 1990s. Alpert announced his candidacy on FOX News in May 2009, calling Senator Dodd “Bambi” and saying he’s become part of Washington’s “culture of corruption.”

Roger Pearson announced he would start a Senate exploratory committee back in April. “I don’t believe in career politics or career politicians,” Pearson said in a clear reference to Dodd. The former Republican who once represented international tennis pros now practices corporate land use law in Stamford.