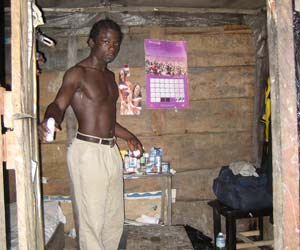 “Man, I feel intimidated in this place,” Williams Ajayi said, blinking at the fancy furniture and rows of specialty soaps of the Protea Hotel in Abuja, Nigeria. He’d never seen his country’s capital before, let alone a cush hotel room. When I met Williams four years ago, he was a 23-year-old militant sniper in the southeastern oil-producing region of the Niger River Delta. I was there as a Fulbright scholar, researching oil politics. I planned to write a play about it.

Since then, my one-man show Tings Dey Happen has enjoyed long runs in San Francisco and New York. Its main character is modeled on Williams—his story became the soul of my play, giving rise to the militant-turned-pacifist character, Okosi. Williams’ native name is Okosi, meaning “the young one who is wise.”

This fall, the US State Department invited me to perform in five Nigerian cities as part of its public diplomacy efforts. But security had deteriorated in the Delta—the targeted kidnappings of oil workers had evolved into random shootings—so I couldn’t travel there. Instead, I bought Williams a plane ticket to Abuja.

He sized up my hotel room. The plush hotel bed was nearly as big as the shack he called home. We toasted our reunion, dipping into the hotel’s complimentary bottle of South African wine and Ferrer Rocher chocolates. Back in the Delta, luxury was smoke coils to keep the swarms of mosquitoes away.

I first met Williams one overcast morning in 2005. A speedboat had carried me to the tiny village of Nembe Creek, a maze of mangroves and creek channels. Nembe is one of many Delta villages embroiled in a conflict between media-savvy militants, the Nigerian government, and multinational oil companies. Eighty percent of Nigeria’s export revenue comes from the 2.3 million barrels of oil a day pumped from the Niger Delta. America buys almost half of it; Nigeria is America’s fifth largest foreign oil supplier.

But the villages of the Delta have seen almost nothing from this forty-year windfall. Nembe Creek has no fresh water, no electricity, no health clinic. From their wood and tin-roof shacks, villagers can look across a creek channel to a Shell Oil flow station, which has fresh water, electricity, a health clinic, computers, air conditioning, and a helicopter pad. Oil wells and pipelines surround the village.

So in the past decade, many of the jobless young men of the Niger Delta have armed and organized themselves, determined to get a cut of the business. Nembe Creek was known as a hotbed of militant activity.

When I arrived that morning in 2005, a group of militants promptly took me to a shack and did their best to intimidate me, standing stone-faced and firing questions. I explained that I wanted to stay for several days and learn about their lives.

Most of them thought I was crazy. I was the first white person to come to the village; no ex-patriot Shell worker had ever crossed the 50-yard channel, they told me, to spend time in Nembe Creek. The town brothel was the only place one could rent a bed, but company was included. And some of the militants, Williams later told me, felt my potential ransom payment as a kidnap victim was too valuable to pass up. He’s worth 25 million Naira ($167,000), they said. Why are we throwing away money?

But Williams saw another opportunity. “I thought maybe I can steal your language.” Williams thought learning my skills as a researcher, writer, and interviewer were worth more than my ransom price.

So he took me in, shared his small bed and shack, brushing off pressure from his fellow militants to kidnap me. During my several stays in Nembe Creek, he served as my interpreter, guide, and protector as we traveled around Nembe Creek and other neighboring villages by boat.

And gradually, in a low voice at night, in the candlelit haze of mosquito coil smoke, he confided that the militant talk of “freedom fighting” was all rhetoric, a convenient cover story for criminal activity. For uneducated people who couldn’t compete for scarce oil industry jobs and were tired of scraping out a meager existence fishing from the polluted creeks, there was a better way. The best gig around was scaring up oil dollars by waving around an AK-47.

To be a militant was to enjoy the gangster lifestyle. “They say, we are going on a mission,” Williams explained, “so you go on speedboat for surprise attacks on soldiers and steal their arms, you go and tap the pipelines for oil, you make destruction on a village to show them you are most powerful, that Shell must pay you so you won’t attack again. Then you drink strong drink, they give you big money, and you feel big-headed.”

Williams is self-possessed, and has a quiet presence that initially one might confuse with shyness. He is strong, compact, and an excellent athlete. Orphaned at an early age, he signed up for the Nigerian Navy and went away for basic training at 17. But he observed that the officers from Northern Nigeria often abused the people of the Niger Delta, his people. So he fled back to Nembe Creek in disgust, carrying with him the government-issued machine gun that he would later use to fire on government forces in clashes in the creeks.

Over the years, the success and bounty of militant operations in the Niger Delta grew. Williams’ crew captured heavy-duty machine guns from Nigerian navy boats and installed them on their own boats. Their speedboat convoys could overtake oil rigs more than 40 miles out to sea, and cruise all the way to Cameroon and Equatorial Guinea to pilfer weapons from those nations’ armories. Throughout, the militant leaders claimed to be nobly battling twin oppressors: the Nigerian government and their multinational oil company accomplices.

But as Williams and others explained to me, the web of corruption is tightly woven. The local and state politicians hire the militants as thugs to ensure their success during elections. The Nigerian military only raids villages if the militants attack oil pipelines that the military itself is stealing oil from. The village chiefs and oil company flacks share community development contract money donated by the oil companies instead of building anything with it. Everybody who is a threat is given a cut.

Restraint and mercy, however, are rarely rewarded. One time Williams convinced his superiors to spare the lives of five young Niger Delta boys whom they had captured. Because he refused to kill them, he wasn’t paid that day.

The more Williams explained all this to me, the more he became ashamed of himself and his lifestyle. He decided it had to end. I gave him a little money, books, and clothes, and introduced him to a researcher in Port Harcourt who could help him find a job. I thanked him for all his help, and wondered if I’d ever see him again.

Williams’ comrades were not impressed with his transformation. They kidnapped him, took him to a camp in the bush, tied him up, and left him to be bitten by mosquitoes all day and night. They pressured him to rejoin the group. He refused. They dug his grave, and told him they were going to sacrifice him to the gods. One of the militants, called Captain, whom I had spent evenings with, drinking local gin and recording his throaty war songs, brought Williams some ceremonial rocks soaked in blood, a sure sign of doom. Williams thought he was going to die.

He talked to one of his guards, an old friend from childhood, looked him in the eyes, and told him: After you kill me, you must go tell my son that his father is dead, and you killed him. This was too much to bear for his captor, so he sprung Williams free. As Williams ran out of the camp, another militant tried to stop him, and slashed him in the forehead with a machete. Williams escaped by canoe and paddled several miles to a town with a hospital.

Since his escape, Williams has sometimes worked as a day laborer, sometimes gotten by on free meals from old friends. He lives from day to day again, like most Nigerians. Gone are the days of adrenaline-fueled battles, the big payments. Gone too is the horror of killing. “I’m happier now,” he said. “I have a free mind.”

Williams told his story in a calm, steady voice. By the time he had finished we were at the poolside bar, sharing a beer. The muffled sound of Abuja traffic floated into the hotel compound.

Then he said something he had said before when I left in 2006 but which I didn’t completely believe: “You were like a light in my life.” I winced, wary of the trope of White Man in Africa: the false savior, the bumbling do-gooder. But he explained, “I just saw you, the way you could act, the way you could be. I thought, I want to have that too.”

Since leaving Nigeria, I have shared Niger Deltans’ stories in hundreds of performances, but I never know whether they will have a lasting impact. Yet here was Williams saying that watching me build the show had changed his life.

That was my last night in Abuja. A bullet-proof Suburban arrived at dawn at the hotel to take me to the airport to fly home. Williams came down to the lobby to say goodbye. I gave him some money, books, clothes, my jacket, my radio, and some art supplies, as he is an aspiring visual artist.

Last week, Williams called to tell me that a Nigerian senator he met in Abuja had promised to sponsor his further education. I congratulated him, and asked him if he thought the promise would really work out. “I don’t know,” he said. “I just have to believe it will.”

Dan Hoyle‘s US State Dept.-sponsored tour in Nigeria is being made into a documentary. His new solo show The Real Americans, based on three months Hoyle spent traveling through small-town America, opens January 21st, 2010, at The Marsh theater in San Francisco.