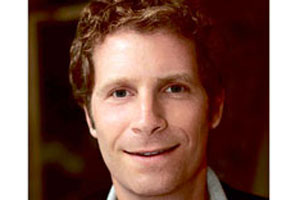 Photo by Matthew Brown, used with permission from Nathaniel Frank

Last week, Rep. Alcee L. Hastings, Florida Democrat, introduced a bill that would allow gay service members to testify at Congressional hearings without jeopardizing their careers by violating “Don’t Ask, Don’t Tell.” I spoke on the phone with Nathaniel Frank, author of Unfriendly Fire: How the Gay Ban Undermines the Military and Weakens America and senior research fellow at the Palm Center at the University of California in Santa Barbara, about this call for temporary immunity and his research on gays in the military.

Mother Jones: Beyond the obvious logistical issue it addresses, what other messages, if any, does the introduction of this bill send?

Nathaniel Frank: For so many years this debate has focused on straight people, even though it most directly affects gay, lesbian, and bisexual people. This bill sends the message that the debate can only be healthy and effective with active duty gay people at the table. So in addition to being a measure that’s aiming for passage, it is, I think, also aiming to send that message and to exert pressure for repeal, especially given the stumbling blocks that the repeal process has seen in the past year.

MJ: How would you characterize a Congressional hearing on “Don’t Ask, Don’t Tell” that excluded gay troops from the debate?

NF: There’s a blog that I wrote for the Huffington Post about someone who testified in a hearing in 1993 but had to lose his job in order to do so. The politicians and others who express skepticism about openly gay service insist that they want to hear from the military brass. There’s room for retired service members, professionals and experts, but politicians have said they want to hear from the military. How can we have an informed debate about this if the only active military people we hear from are the joint chiefs of staff or straight people? This is a policy that muzzles gay people as they serve their country, and it makes no sense to do the same as we discuss when, where, and how to end the policy like 25 other countries have done.

MJ: Why has Obama delayed a hearing on “Don’t Ask, Don’t Tell,” and hesitated to make an executive order to suspend it, when so much evidence exists that refutes its assertions?

NF: The White House clearly made a decision from early on that it wanted to avoid the mistakes of the Clinton years, which is the model to which they look for both what to do and what not to do. The White House is heavily staffed with Clinton personnel, which means their tactics and strategies, as well as their emotional scars, have been learned from that administration. That likely plays an important role in decisions this White House has made. One of those decisions has been to avoid wading into what they see as culture war issues, even though the world and public opinion about gay people has changed since 1993. I think that as the Democrats look to the mid-term election and eventually to Obama’s reelection, their strategy has clearly been to avoid confronting the issues that they see as having derailed and wounded Clinton’s agenda.

MJ: How would you compare the mobilization of resistance to this repeal to that which took place when Clinton threatened to lift the ban on gays in the military?

NF: First of all, we haven’t seen it yet in earnest. The debate hasn’t hit the airwaves yet, which it may do in 2010—many thought it would happen this calendar year—but the Democrats have successfully warded it off, so we can’t say yet. I think when it hits it will surprise some people in its volume and vehemence, but it may not be as strong as it was then, because the religious right is wounded and weakened—though far from dead—and the culture has changed so dramatically, making leaps and bounds in the direction of tolerance of gay people.

MJ: There also seems to be a more active and visible movement for repeal now than there was when Clinton was elected. What’s your take on this?

NF: There’s a much greater degree of understanding, of effort, and of visibility by gay service members, gay veterans, and gay organizations this time around than the last time, and that’s having an impact. You see people like Lieutenant Dan Choi becoming highly visible and active and influential as a spokesperson for a policy change that’s long overdue, and that’s supported by up to four-fifths of the public, and increasingly supported by military members, too. So I think gay groups have also learned from the failures of 1993, and have become more sophisticated, and have come to understand how important visibility of service members is for this debate to go forward.

MJ: How will the fate of “Don’t Ask, Don’t Tell” affect other LGBT policy issues in the US?

NF: It will depend somewhat on where it comes in the calendar. There’s the risk, on the one hand, of gay fatigue. If several bills that are seen as gay rights measures pass in a row, at a certain point the public could say, “Okay, they’ve gotten theirs, enough already.” On the other hand, some people point out it sometimes takes initial movement to grease the wheels for continued progress, so in particular the Employment Non-Discrimination Act—which is heading for a vote that looks promising after years of inaction—could be a big boost because it could allow millions of Americans currently in the closet to come out and advocate for their own equality by virtue of the protections it would provide.

MJ: Will the Hastings bill push Obama to establish a more concrete timetable for repeal?

NF: I don’t know that this particular bill will force a timeline from the White House. They seem to be comfortable discussing a timeline for ending these massive wars overseas, but less comfortable committing to a timeline to let gays serve in those wars openly. So I’m not sure that the timeline will be dictated by Congressional pressure, though continued public pressure and embarrassing news about discharged military personnel can have an influence, and I think we will see a real political debate about this in 2010. But that may stop short of certain commitments by the White House.