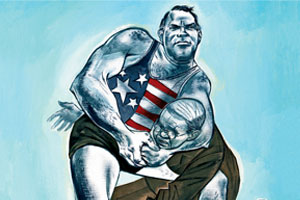 Even before he called Dick Cheney a blood-sucking vampire, or a female ex-Enron lobbyist who now works for Federal Reserve chairman Ben Bernanke a “K Street whore,” Rep. Alan Grayson stuck out on Capitol Hill. The hulking 6’4″ freshman Democrat from central Florida sports garish shirts and ties beneath his dark suits, wears pull-up Italian boots, and approaches his job with the earnestness of an 18-year-old campaign volunteer. Grayson says he wants Americans to pay attention to “what’s really at stake” as opposed to “the minutiae” of politics. To that end, he has been trying something new, and perhaps foolhardy: saying pretty much whatever he feels like and not worrying how people react.

Being unapologetically outspoken has earned Grayson a great deal of attention. In a speech on the House floor this past September, he summed up the Republicans’ health care plan as “die quickly.” Even after spending the final weeks of summer talking about “death panels,” conservatives demanded an apology; pundits likened Grayson to Rep. Joe “You Lie!” Wilson, and the National Republican Congressional Committee branded him “DisGrayson.”

But instead of backing down, Grayson went all-in, saying that he’d “like to apologize to the dead”—the more than 44,000 Americans who die every year because they have no health insurance. Then he set up a website to honor them. When a reporter asked about accusations that the site was exploitative, Grayson snapped, “Do we always have to let the other side set the agenda?”

All this has earned Grayson comparisons to conservative loudmouths like Rep. Michele Bachmann (R-Minn.) (see “Capitol Hill’s Most Unhinged Republicans“), with the New York Times referring to him as a “wing nut.” But when I met Grayson in a squat suburban civic center in Tavares, Florida, two weeks after the “die quickly” flap, he didn’t seem the least bit chastened. In fact, it is quickly obvious that Grayson doesn’t do chastened—even when it might be politically advantageous for a first-term congressman in a district that twice went for George W. Bush. “I recognize that I’m in a very competitive district,” Grayson says. “But I really want to take advantage of the opportunities that are out there to say what’s on people’s minds, whether this experience goes on for me or not.”

There is a lot on Grayson’s mind. In a short interview, he quotes Polonius, describes conditions in Somalia, which he’s visited (“a hellhole”), and cites ancient Rome’s fire department as a cautionary tale on how outsourcing government to private contractors is a bad idea. He chokes up while explaining how he tries to emulate the “strong moral sense” and “toughness” of Robert F. Kennedy and Martin Luther King. Grayson speaks with a conspiratorial intensity, as though he’s always passing along a big secret. He has an opinion about almost everything, from Joni Mitchell to monetary policy, and his opinions are nothing if not passionate.

Grayson grew up in a Bronx tenement, holds degrees in law and public policy from Harvard, and lives in a 12-room Orlando house with his wife and five children. Politics is something like his fifth career. He worked his way through college as a night watchman and a janitor, became an economist, and then a lawyer. In the early 1990s he briefly left law to become the president of a telecom firm. (Selling his stake and investing the proceeds helped make him the 12th-richest member of Congress.) Between the beginning of the Iraq War and his election to Congress, he drew attention for suing military contractors who perpetrated what he calls “the crime of the century” by massively overcharging the government for their services in Iraq. In 2006, he ran for Congress and lost in the Democratic primary. Two years later, he beat a four-term Republican incumbent who broke a pledge to not run again.

Besides his big mouth, Grayson has become known for his relentless pursuit of the Federal Reserve. In March, he signed on to Rep. Ron Paul’s decades-old bill to audit the Fed, a proposal he considers “a model of bipartisanship.” He takes credit for bringing on about 100 Democratic cosponsors—the bill now has more than 300 in all and looks likely to pass in the House. Grayson says he doubts that having a powerful central banker like Fed chief Bernanke is “a prudent economic model.” The Fed, he contends, is incompetent and, even worse, unaccountable.

In a series of hearings before the House financial services committee last year, Grayson grilled a procession of Fed officials, including Bernanke, like a lawyer cross-examining hostile witnesses. In one session, he asked Scott Alvarez, the general counsel, whether the Fed could legally “manipulate the stock market.” Alvarez looked pale and uncomfortable; Grayson looked like he was enjoying a great steak. A five-minute video of Grayson interrogating an increasingly squirmy Elizabeth Coleman, the Fed’s inspector general, about the whereabouts of more than $1 trillion in bailout money has racked up more than 3 million views on YouTube.

Grayson’s attacks on the Fed have earned him some strange bedfellows. In August, he appeared at the Florida convention of Ron Paul’s Campaign for Liberty. He made the “K Street whore” comment as a guest on the radio show of big-government conspiracy theorist and 9/11 Truther Alex Jones.

Grayson has consciously decided to court controversy. He points to Texas populist and radio host Jim Hightower’s book, There’s Nothing in the Middle of the Road but Yellow Stripes and Dead Armadillos. Hightower’s adage is “a rich and important observation,” Grayson says: As Republicans discovered decades ago, energizing your base is a good way to win elections.

That idea has little currency within the Democratic establishment, but it’s big in the lefty blogosphere, where Grayson has become a major celebrity. A one-day online “money bomb” fundraiser in November brought in more than $500,000. One of Grayson’s first hires was Matt Stoller, the fiery cofounder of the progressive website OpenLeft. As senior policy adviser, Stoller is deeply involved in charting a strategy “on the basis of what will do the most good,” Grayson says.

Besides, Grayson argues, moderates don’t do very much. Too many members of Congress just “take up space, and over time you wonder what they’ve accomplished,” he says. No one outside of Washington cares whether the health care bill is written to please moderates like Sen. Olympia Snowe (R-Maine), he says. “Nobody thinks that way. Olympia Snowe’s own mother is saying, ‘I want health care, and I want it now.'” Nor, he says, does anyone outside DC care about the punditry’s idea of political decorum. “If you get bogged down in the sense that you have to be nice about it, you’re completely misreading the public mood.”

That may be true, but can it help him get reelected? One poll put Grayson’s home-district approval rating at around 32 percent, and according to the Federal Election Commission, seven Republicans are registered to run against him. “I don’t know anybody else who’s done things the way we’re doing them now,” Grayson says. If he can keep running his mouth and still survive through November, he might not be alone much longer.