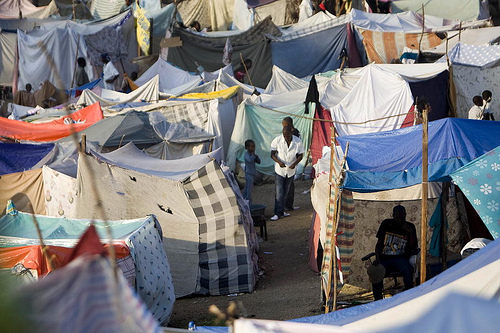 In the days since the January 12 earthquake pummeled Haiti, aid has poured in from around the world through governments, the United Nations, and non-governmental organizations. And while the immediate relief work has been difficult and at times frustrating, workers on the ground there have made one thing clear: We should be thinking in terms of decades, not days, when it comes to assisting the tiny nation.

In a call with reporters on Thursday, staffers for a number of NGOs in the country emphasized the need for long-term support. The outpouring from private citizens has been substantial; InterAction, a coalition of U.S.-based NGOs focusing on global poverty, this week reported that Americans have given $350 million to support relief work. Much of that is helping meet immediate needs for food, water, medical supplies, and shelter. But with the devastation already retreating from the headlines, the needs for the next months, years, and possibly decades should not be forgotten, they said.

“We’re not talking years as in 2, 3 or 5… but more of the long-term solutions for Haiti,” said Amy Gaver, director of international response and programs at the Red Cross. “Haiti has needed a global solution for systemic problems for a very long time.” The relief work, said Graver, should include planning for sustainability, with a focus on the long-term and a plan for organizations within the country to assume control of rebuilding.

Mario Flores, director of disaster response field ops at Habitat for Humanity International, said as many as 200,000 houses were severely damaged, and 1.2 to 1.5 million people face displacement. “Haiti had a lot of problems before the earthquake; the earthquake has only exacerbated those problems,” said Flores. NGOs and governments working in the country, he said, should take the time “to really think through what the long-term recovery is going to look like.”

The quake and resulting exodus from Port-au-Prince is also stressing other areas of the country as an estimated one million city dwellers return to the countryside. George Packer explains the country’s long-term needs vividly in a piece in the New Yorker this week as well.

The country’s extreme poverty and fraught politics, of course, have both intensified the impacts of the natural catastrophe. “The situation before earthquake was quite precarious,” said Kathryn Bolles, director of emergency health and nutrition at Save the Children. Relief, then, must also seek to address the bigger challenges in the nation. And it’s also compounded by concern that this recent quake may be a prelude to more extreme seismic catastrophes in the region, and the ever-present danger of severe tropical storms.

As the long-term challenges begin to become clear, the greatest need is still for monetary donations. Here’s a list of some of the most effective NGOs to give to.