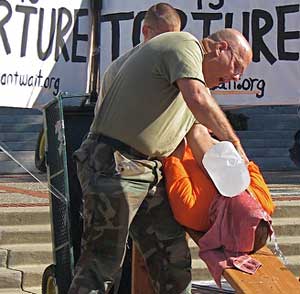 A prominent backer of waterboarding has quietly recanted his endorsement of the torture technique. In December 2007, recently retired CIA operative John Kiriakou told ABC News that 30 to 35 seconds of simulated drowning was all it took to make senior al Qaeda commander Abu Zubaydah sing like a bird. “From that day on, he answered every question,” Kiriakou said. “The threat information he provided disrupted a number of attacks, maybe dozens of attacks.”

Kiriakou’s stunning account—made in an exclusive interview with ABC’s Brian Ross—was seized upon by torture proponents as proof that they’d been right all along. But the New York Times discovered last April that Kiriakou “was not actually in the secret prison in Thailand where Mr. Zubaydah had been interrogated but in the CIA headquarters in Northern Virginia.” Now, Jeff Stein of Foreign Policy magazine has discovered Kiriakou himself retracting the waterboarding claims in his recently released memoir, The Reluctant Spy:

“What I told Brian Ross in late 2007 was wrong on a couple counts,” he writes. “I suggested that Abu Zubaydah had lasted only thirty or thirty-five seconds during his waterboarding before he begged his interrogators to stop; after that, I said he opened up and gave the agency actionable intelligence.”

But never mind, he says now.

“I wasn’t there when the interrogation took place; instead, I relied on what I’d heard and read inside the agency at the time.”

In a word, it was hearsay, water-cooler talk.

“Now we know,” Kiriakou goes on, “that Zubaydah was waterboarded eighty-three times in a single month, raising questions about how much useful information he actually supplied.”

Indeed. But after his one-paragraph confession, Kiriakou adds that he didn’t have any first hand knowledge of anything relating to CIA torture routines, and still doesn’t. And he claims that the disinformation he helped spread was a CIA dirty trick: “In retrospect, it was a valuable lesson in how the CIA uses the fine arts of deception even among its own.”

Two years after Kiriakou went public with his ill-considered support for waterboarding, public opinion has turned in favor of the formerly controversial tactic. In the wake of the attempted Christmas Day airplane bombing, Rassmussen polling found “58% of US voters say waterboarding and other aggressive interrogation techniques should be used to gain information” from the underwear bomber—who spoke readily to authorities without the threat of torture.

Stein goes on to get a priceless response from the CIA and lays into ABC’s shoddy investigative reporting. (In the transcript of the interview, Ross fails to ask Kiriakou if he actually witnessed the questioning of Zubaydah.) The whole piece is worth a read.