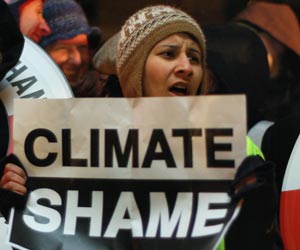 This is the second part of a two-part series by Bill McKibben, “Copenhangover: Rallying for Next Steps.” Read Part I here.

All of the schemes I’ve talked about so far are deeply rooted in political reality, in the sense that they attempt to use current politics to start the grinding process of systemic transformation. There is another possibility, of course, and that involves dramatically changing current politics. Which brings us to the next thing we need to do:

“The idea that we’ll address climate change by tweaking a few things isn’t going to work,” says Rachel Smolker, who as an organizer at Climate SOS, and co-director of British-based Biofuelwatch, helps build what some might call the more radical flank of the climate movement, at least if radical means wanting to reach the roots. “The system we’ve got relies on constant economic growth, on trade policies that make others beholden to our growth. We see the inequities that come, the huge division of wealth. If we don’t address those problems then we can’t address climate change.” Gary Houser, who helped organize a blockade of the Chicago Climate Exchange, says that’s not a distraction but a necessity—until we recognize that it’s “the power of the vested interests” blocking reform, and until we “start moving in a unitary way toward addressing it, we are simply going to run out of time.”

Smolker wants less to pass a bill than build a movement. For the demonstrators in Copenhagen, she notes, “The slogan was ‘System Change, Not Climate Change.'” The problem, as Smolker understands, is that System Change takes a while—and a while is precisely what we don’t have. It’s hard to imagine the climate movement being able to build enough steam in enough time to change the course of America’s politics, or for that matter China’s, on this scale. “What I hope for may be largely unrealistic,” Smolker admits—but no less unrealistic than trying to defy physics.

One difficulty with all these approaches is that their proponents spend a great deal of time battling each other. Romm calls the Breakthrough Institute “part of the anti-environmental movement,” and they in turn accuse him of “climate McCarthyism,” indeed of being “far more influential today than Joe McCarthy was in the 1950s.” More radical parts of the climate movement have held demonstrations outside the offices of Beltway environmental groups to denounce cap-and-trade, and on and on. That kind of internecine battle is understandable—but it also may be beside the point. Because at the moment there’s not a great public groundswell to do anything at all about climate. It may be the biggest problem humans have ever faced, but in one recent poll Americans ranked it last of 20 issues in terms of importance. On the last day of the year, Journalism.org published a chart showing the biggest news stories of 2009: The economy took up most of the space, and balloon boy and Bernie Madoff of course put in appearances, but there was also room for stories I didn’t even remember: “Jaycee Dugard found.” “Climate change,” “Copenhagen,” or “global warming” didn’t even appear. Which means that no matter what your preferred solution, it would help if more people perceived that a solution was necessary at all.

Indeed, you might define the problem this way. There may be a left flank of the climate movement, but at least in this country there’s not much of a mainstream movement to outflank. Al Gore and his various campaigns are doing a heroic job of trying to spread the word, but the environmental groups that you would imagine are busying  themselves building a broad public consensus are instead focused on lobbying (and lobbying, as they’re finding out, is hard as hell when there’s no real movement behind you). Still, it’s possible to imagine where that movement might come from.  In fact, there may be a kind of mainstream campaign being born in a hundred different places, and waiting to coalesce.  You could almost call it a fifth strategy:

5) Trying Everything, and Seeing What the Hell Might Work

Greenpeace, for instance, has turned some of its attention to district organizing in recent years, campaigning hard in swing congressional races, and they’ve worked with the coalition 1sky.org; both have grave doubts about the leading bills in Congress, but not about the need for congressional action. There are other emerging allies: Avaaz.org, which aims to be the global version of MoveOn, has made common cause with groups like Oxfam that have figured out there is no way to battle poverty without fighting climate change. The list goes on—local Sierra Club chapters, or the inspiring work of the Energy Action Coalition on campuses, or the fight against mountaintop removal in the hills of Appalachia, or the work of Green For All to enlist poor and minority communities. No one in the US managed to break ground on a new coal-fired power plant last year, testament to the power of local groups and hard-working attorneys; a sit-in by 5,000 was enough to convince Congress to shut down its own personal coal-fired power plant. Ground-level technological advocates have scored big successes—Felix Kramer and the CalCars campaign, for instance, are one big reason you’ll be able to buy a plug-in hybrid at a GM showroom later this year. Peak Oil activists at places like the Post Carbon Institute increasingly make common cause with environmentalists; Transition Towns work on a post-petroleum future. I know people planning Million Kid Marches, and running high school alliances for climate education, and making sure churches install efficient lights.

There’s a remarkable community of activists (and bloggers), driven as much by opportunity as ideology or programmatic conviction, who help drive the conversation. But so far it doesn’t add up to enough. You could tell that in Copenhagen—tell it when Obama put in an afternoon’s hard work, worked out a mediocre compromise that barely saved face, and then high-tailed it home to beat a snowstorm. One guesses someone could have found him a hotel room. But he neither wanted to stay nor felt he needed to. The climate movement didn’t manage to put enough pressure on the administration—or, to look at it in a kinder light, give it enough political room. We can be mad at the president and mad at the Congress, but politicians, even the best of them, are highly calibrated to sense the direction and power of the political wind. And right now they know that it’s not blowing very hard.

So maybe we need to build a bigger movement before we start much more infighting. For a very long time environmentalists have assumed that just because reason dictates we must act, action will happen. But experience has shown that action won’t happen, unless we make it—by organizing and motivating the entire community. That’s what must happen here too. And it’s completely possible—two years ago, with Step It Up, we organized 1,400 rallies in all 50 states; this fall, at 350.org, we managed to hold 5,200 rallies in 181 countries, what CNN called “the most widespread day of action in the planet’s history.” If you can organize tens of thousands in Addis Ababa, it should be possible in Albuquerque. But we need more people willing to go to the jail, and to the city council meeting, and to the mat. It needn’t all be doom and gloom by any means—in fact, an honest mix of warning and hope is required. As Nordhaus points out, too much horror and “people just kind of check out.”

There’s perhaps nothing more important in the US right now than getting across the basic message that we’re in trouble, and that there are smart ways out of that trouble. In the depth of a cold US winter, with the power of the fossil fuel lobby apparent in the op-ed columns and cable news shows, that seems hard to imagine. But NASA has predicted that globally this will be the warmest year on record; there will be opportunity to make the case for the future. Until people believe that the future is both imperiled and possible.

Read Part I of this series here.