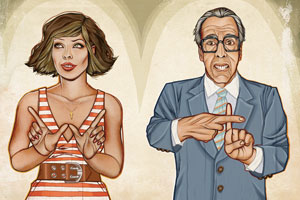 As someone who Tweets for the Lord, 27-year-old Esther Fleece has her work cut out for her. In September, the evangelical powerhouse Focus on the Family hired Fleece as an emissary to people between 18 and 29, a generation that between now and 2018 will grow by 4.5 million eligible voters each year. As a group, these “millennials” already dwarf the politically powerful senior population, but they make up only a small and ever-shrinking sliver of the conservative Christian movement, which in turn accounts for 35 percent of the GOP vote. Fleece’s job is to bring them into the tent.

Just how tricky a task that is was evident when Fleece made her public debut in mid-September at the Values Voter Summit in Washington, a must-attend event for Republican presidential wannabes hoping to woo the party’s most committed foot soldiers. Barely a week into the job, she was part of a lineup that included House minority leader John Boehner, former Education Secretary Bill Bennett, and ex-presidential hopeful Mitt Romney. A bubbly blonde with a communications degree, Fleece took the stage before a packed auditorium and surprised Focus on the Family president Jim Daly with a fist bump.

When Daly asked how many of her young Christian friends voted for Barack Obama, Fleece offered sheepishly, “About 60 percent.” The audience gasped. “They thought he would bring diversity,” she explained, surveying the virtually all-white crowd. “[Millennials] are a very diverse group.” And what about gay marriage, Daly asked? Fleece conceded that banning it didn’t resonate with many of her friends—some of whom, she let slip, are gay.

Fleece tried her best to soften her message with soothing biblical references and optimism for the future. But the takeaway was obvious: She was there because most of her contemporaries were not. Organizers had tried hard to build an under-50 component to the event, but as it was, the Boy Scout color guard was the most visible youth presence. The summit did feature a speech by the youngest Baldwin brother, Stephen, a talk radio host who also runs an “extreme sports” ministry. But when Baldwin, 43, asked young people to stand for a round of applause, only a few dozen kids leapt up in a crowd of hundreds.

A few weeks after the Values summit, Phyllis Schlafly‘s group, the Eagle Forum, held its annual How to Take Back America conference in St. Louis. There, too, organizers devoted a session to “How to Bring Youth Into the Conservative Movement.” The moderator was 65-year-old Orlean Koehle, president of the Eagle Forum’s California chapter, whose qualification derived from teaching at a John Birch Society youth camp. She was joined by Schlafly’s son Andy, 47, a lawyer who also teaches online classes for home-schoolers, and Gary Bosley, a 64-year-old marketing executive. Only University of Virginia law student Karin Agness, 25, the founder of a conservative student group, helped bring down the average. Her advice on reaching a younger audience? Book clubs!

Polling data provides little solace for conservatives: Not only are most millennials unmoved by many of the movement’s core positions, but some of these positions are actively driving them away. A recent study by the Center for American Progress found that nearly 60 percent of millennials favor gay marriage; among voters over 30, 60 percent oppose it. And the Barna Group, a market research organization that caters to Christian clients, has found that even among young people who regularly attend church, only a third believe that “homosexual lifestyles” are a major problem. Young churchgoers, writes Barna president David Kinnaman in his book, unChristian, “remain unconvinced that the homosexual lifestyle is a problem for society…and they are embarrassed by the church’s treatment of gays and lesbians.”

Nor is tolerance the only area where Focus on the Family and similar groups have, in Fleece’s gentle phrase, “something of an image problem.” She notes that Focus’ founder, 73-year-old James Dobson, turned the organization into a political force primarily through a radio audience, and “I haven’t listened to much radio lately.” She’s helping Focus reach into social media, tweeting about music (“#u2webcast is incredible”), Scripture (“Get the Bible on twitter! New verse every hour”) and cars (“looking for SUV suggestions. Safe, good on gas, cute…”). And she seeks to connect with her generational peers via her own childhood experience: After first her father and then her stepfather left the family, she says, she was about to enter foster care at 17 when some caring people from her church rescued her. She found stability inside the “Christian bubble,” going to a religious college for two years before transferring to Oakland University in Michigan. Fleece says a lot of millennials can relate to her story: “We just live in a divorce culture. People don’t realize the tremendous hurt that goes on with that.” She believes her generation’s experience with divorce is one reason messages about the sanctity of heterosexual marriage don’t ring true to her peers. “It is a message that hurts people. And our message isn’t to hurt,” she explains. She’s still struggling for an elevator speech that stresses the moral superiority of marriage between a man and a woman without making anyone feel bad.

It’s a challenge when you work for an organization that, until last summer, was still running seminars to turn gay people straight. But Fleece hopes that at some point, gay people will feel welcome at Focus. “I have biological family who are gay. I mean, let’s be honest—who doesn’t?” she says. While she doesn’t endorse their lifestyle, Fleece thinks there is no reason to single out gays for more moral censure than, say, men who cheat on their wives. “We’re all sinners.”

At one time, such a confession might have seemed like a firing offense at a group like Focus. But Fleece has been hired specifically to push the envelope, a move that suggests that at least some conservatives recognize the existential urgency of reaching youth. Gary Schneeberger, Focus on the Family’s vice president of ministry communications, says it comes down to simple numbers: “Pollster Frank Luntz calls this generation the 2020 generation. That’s when 90 million of them will be eligible voters. They will represent 39 percent of the electorate.”

Schneeberger is fluent with Center for American Progress research indicating that millennials think religious faiths should focus on tolerance and “peace in society,” not fighting gay rights and abortion. What young people really care about, he notes, are “social justice issues” and being part of a larger cause. He admires the way President Obama tapped into this yearning during the campaign, a model that Focus hopes to emulate. “Our goal is to recognize what motivates this generation,” he says. “We need to take what we’re already doing”—such as ministering to foster children—”and express it in a way that meets them where they’re at.”

As for revising the positions that are alienating youth, though, that’s not really in the cards. “The things we stand for, especially in the policy realm, are things that are rooted in our understanding of the Scripture,” says Schneeberger. “So when we say we think we believe that marriage should be between a man and a woman, that’s not going to change.”