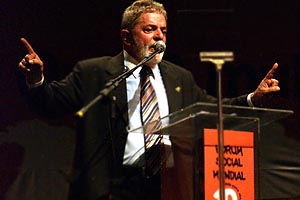 The corporate owner of a Kansas coal-fired electricity generation plant has agreed to a half-billion dollar settlement for Clean Air Act non-compliance. Per the EPA news release: Westar Energy to Spend Approximately $500 Million to Settle Clean Air Act Violations. Emissions to be cut by more than 75,000 tons annually. That’s roughly 6.7 million dollars per ton of excess pollutants emitted since they first modified their coal-fired plant without proper permit approvals. With the Cheney protectorate gone, they, and many other coal-fireds, have to do what the law long required.

There’s all sorts of pot and kettle talk going on in this one. The Times of India reports that US Executive Director at the World Bank Group Whitney Debevoise has written a letter saying the World Bank and other multilateral development banks should stop funding building coal power plants in developing nations; they instead should “remove barriers to and build demand for no or low carbon resources.”

Although the venues of the World Social Forum were scattered throughout the city of Porto Alegre, Brazil and the issues ranged from economic injustice to looming environmental catastrophes, the antagonist at each was shared: Capitalism. The highlight of the second day of the Forum was a visit from Brazil’s President Lula, who delivered a rousing speech articulating much of what was discussed earlier in the day, vowing that Brazil is prepared to take the lead on Green reform—and that other nations, particularly the world’s biggest polluters, need to make up for the harm they’ve caused.

Last year, the EPA issued a long awaited set of guidelines on regulating large, stationary sources of CO2. The rules, known as the “Endangerment Finding,” used the authority granted to the agency through a Supreme Court ruling that found CO2 to be a pollutant that the EPA could regulate. While environmentalists, especially those skeptical of Congress’ ability to regulate CO2, rejoiced, some industry groups protested, filing a lawsuit. Today, 16 states and New York City joined the lawsuit on behalf of the government.

Tons of Unwanted Mercury Will Make 40-Year Visit to Texas

The USDOE prepared a full Environmental Impact Statement as the basis for selecting a site to store tons of mercury which no longer can be legally exported. Now we know what happens to all those old mercury thermometers – off to Texas, where they will be interred at a new facility managed by Waste Control Specialists, LLC, near Andrews.