In his piece “Thank You, Wall Street. May We Have Another?” published online this morning, David Corn notes that “populist fury aimed at the one-time masters of the universe has yet to materialize in any targeted manner.” Rep. Paul Ryan (R-Wisc.), who must have read David’s article when the magazine hit newsstands late last month, is trying to change that. 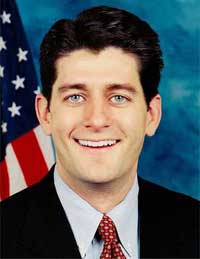 Paul Ryan, Grand Old PopulistRyan recently wrote a piece for Forbes with the provocative title “Down With Big Business.” In a column hammering Wall Street and the financial industry—many of whom are, oddly enough, Ryan’s biggest donors—the ranking Republican on the House Budget Committee addresses most of the points David suggests are inhibiting a “mass movement demanding fundamental change,” including the confusion and fear many feel as a result of the dire economic situation Wall Street malfeasance has gotten us into. However, the reforms Ryan advocates to mobilize the masses and save the economy will seem strange to all but his lobbyists friends: more deregulation.

“If this sounds twisted and counter-intuitive, that’s because it is,” writes Thomas Frank, the token liberal on Wall Street Journal editorial page, in a column about Ryan. Warning of the return of Reagan Revolution-styled GOP populism, Frank remarks, “This is an argument that might have sounded good in 1979 but for it to make sense today one has to disregard the wreckage all around us courtesy of three decades of regulatory rollback.” But it’s an argument that very well might work. “Democrats, for their part, will find it difficult to respond in kind, especially after having spent their first year delivering regal gifts to the insurance industry and dithering over the urgent matter of new financial regulation,” Frank notes.

The Tea Partiers, town hall protesters, and dismal political approval ratings all attest to the anger coursing through out the American electorate. Ryan is attempting to rally the rightwing and the swing voters behind his impassioned-if-incoherent financial reform plan. If the Democratic majority is to last long past the 2010 midterms, they will have to come up with a more compelling response to public outrage than “don’t blame us.” Progressives should follow Ryan’s lead and take a look at David’s story.