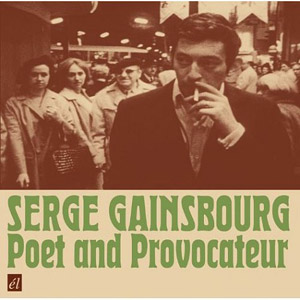 The world becomes slightly richer in Serge Gainsbourg mythology this month, thanks to both a new CD compilation and a biographical film from French cartoonist Joann Sfar. The prolific musical master and chain-smoking lothario was at one time best known for his hit “Je t’aime, moi non plus” (“I love you, me neither”), which featured breathy vocals by English actress Jane Birkin. Explicitly erotic and culminating in a simulated (as far as we know) orgasm by Birkin, it was banned from radio play in several countries, and denounced as obscene by L’Osservatore, the official Vatican newspaper—what greater endorsement could you ask for? These new releases build upon both the artist’s considerable legacy and extra-debauched mythos.

Before I use any more adjectives (and if I start doing it again, feel free to throttle me senseless with a spellbinding seven-minute centerpiece or some ethereal post rock), shall we take a moment with the video for “Je t’aime, moi non plus”? Yes, let’s:

Wasn’t that obscene? Gloriously so. Anyone interested in learning more about Gainsbourg’s ravishing, Gallic (spellbinding, too) degeneracy would be well advised to check out A Fistful of Gitanes by Sylvie Simmons, the first English-language biography about him.

Moving on! Serge Gainsbourg: Poet and Provocateur kicks off with the legendary Frenchman crooning (croaking, really, in the way that he does) a jazz-inflected, snappy number about fingers clicking upon a jukebox, and follows with a handful of relatively rare studio recordings—then a few live ones from a set at Théâtre Des 3 Baudets including “Le Poinçonneur des Lilas,” a spirited lament of the quotidian working world through the eyes of a subway ticket puncher. We’re subsequently treated to a set of Gainsbourg songs sung by French actress Juliette Greco (the man did love his actresses—and they loved him back!), including the exquisite “Les Amours Perdues.” The CD wraps up with Gainsbourg’s score for the film L’Eau à la Bouche and the soundtrack for Voulez-vous Danser Avec Moi? (See the full track list here.) After the jump, a short clip of Gainsbourg making his screen debut in the latter film, which starred Brigitte Bardot.

Now on to the film: Sfar’s cinematic biography, Serge Gainsbourg (vie héroïque) came out last week in Europe and the UK. It supposedly incorporates some bold imaginative elements, such as, according to a rave review in Screen International, “the gutsy decision to give [Gainsbourg] an enormous, clingy alter ego, La Gueule or Ugly Face, a sort of giant talking potato with legs which lumbers after him.” From what I can tell, the film looks stylish and is possessed of a lush visual aesthetic (it is directed by a graphic novelist, after all, whose Gainsbourg watercolors are wonderful). Gainsbourg obsessifs (like this gent at the Guardian) will undoubtedly find flaws, but you can’t please all of the purists all of the time. The film is dedicated to British actress Lucy Gordon, who played the part of Birkin, but took her life last May.

Below, you can watch the trailer for the film, which should be coming to the States, well, eventually.