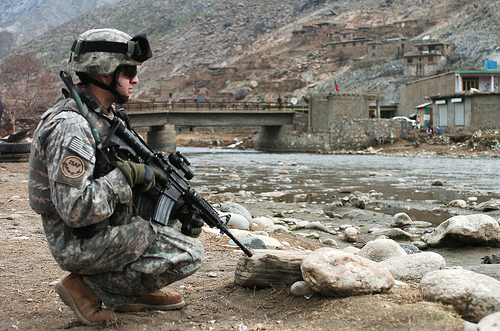 At a major conference in London today, Afghan president Hamid Karzai rolled out his much anticipated Taliban “reintegration” or buyout plan, an initiative for which Afghanistan’s allies have pledged $500 million to pay mid- or lower level fighters to stop fighting and reintegrate into Afghan society. The money could include resettling former Taliban fighters and landing them jobs, but excludes fighters with ties to al-Qaeda or other terrorist networks for inclusion in what’s being called the “Taliban trust fund.” And in discussing the future of the Af-Pak war, Karzai also reaffirmed that his country would need international help maintaining security in Afghanistan for anywhere from 10 to 15 more years; the training of Afghan’s own forces, he added, will require another five to 10 years.

For one, the Taliban trust fund idea, backed by US envoy Richard Holbrooke, will strike even casual observers of American war as little more than a repackaging of the Sunni Awakening movement in Iraq. Indeed, Karzai’s announcement comes a few months after the Los Angeles Times reported that Army Gen. Stanley McChrystal personally dragged out of retirement the key architect behind the Iraqi program, which paid Sunni Muslims to leave the insurgency and even defend against al-Qaeda and other extremist groups. Never mind the fact that Iraq and Afghanistan are wildly different countries, from their populations and political structures to the food they eat and their geographies. Sure, you could argue that the Sunni Awakening, although mired with fraud and graft, resulted in modest amounts of success, but to apply the same lessons from Iraq to Afghanistan, as the Taliban trust fund idea seems to do, doesn’t make a whole lot of sense. (Plus, as Aram Roston’s recent investigation in The Nation showed, so much US funding is already finding its way into Taliban hands that spending another $500 million will only amplify that epic fraud.)

Indeed, the $500 million Taliban buyout plan reminds me a lot of historian Andrew Bacevich’s recent critique of Obama’s Af-Pak policy—namely, that it altogether lacks any kind of imagination or rethinking of the task at hand; that US foreign policy all-too-frequently recycles the same officials toting the same tired ideas, i.e., the surge in Iraq and then in Afghanistan, and now the Awakening in Iraq and the Taliban trust fund. Obama’s national security brain trust, Bacevich adriotly argued, is “unable to conceive of a basis for national security policy that does not involve the increased commitment of American military resources.”

Which certainly dovetails with Karzai’s belief that foreign forces will be needed in Afghanistan for another 10 to 15 years. With each day, the president’s 2011 deadline for beginning withdrawal from Afghanistan resembles nothing more than smoke and mirrors; in reality, the US will be in Afghanistan training the Air Force or funding contractors or flying our drones for decades to come. In this context, Karzai’s 15-year estimate looks rather modest, and today’s conference in London is further confirmation (if you needed any) that the long haul of the Af-Pak war is just beginning.