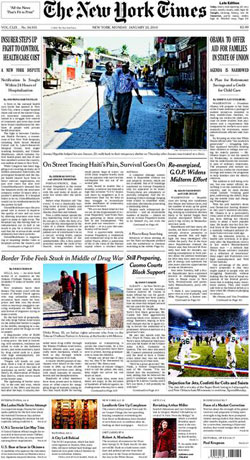 One of my pet peeves is the idea that the news reporting of the New York Times, the Washington Post, et. al. is utterly free of bias or opinion. That attitude—which you saw in Times reporter Peter Baker’s complaints about the addition of Talking Points Memo and Huffington Post to the White House print pool—is just infuriating. Even a casual perusal of the Times or the Post (or, for that matter, the more right-leaning Wall Street Journal) will turn up examples of reporters and/or editors injecting their own thoughts or opinions into stories. And even the cleanest of stories is still affected by the reporter’s decisions: who to talk to, how to describe events, and what kind of credibility to give to different sources. Anyway, today’s example is a story in the Times about Obama’s plans for his State of the Union address, which is scheduled for Wednesday. Describing the administration’s new economic recovery proposals, the reporter writes:

Such programs are, notably, much less far-reaching than Mr. Obama’s expansive first-year agenda of passing an economic recovery package, bailing out the auto industry, overhauling the health care system, passing energy legislation and imposing tough new restrictions on banks. That agenda has left him vulnerable to criticism that he is using the government to remake every aspect of American society.

I added the emphasis there, but that sentence sticks out anyway. It’s hilariously broad—”every” aspect of American society? It’s totally unattached to any sourcing or evidence. Who are these critics? Do they have names? If “Republicans” or “Tea Party activists” are claiming that Obama is using government to remake American society, readers should know that. Just saying that Obama is “vulnerable to criticism” without saying where that criticism is coming from gives the claim a credibility it doesn’t deserve. Does America society seem “remade” to you?

The entire article is problematic as “straight news” because the reporter is arguing that Obama is moderating his policy positions to appeal to the political center. Never mind that White House officials explicitly deny this premise. (White House officials have been known to lie, of course.) The bottom line is that the reporter is making a call about what the truth of the matter is. Breaking news: that’s an opinion. Just because I happen to think it’s a correct opinion doesn’t make it a fact. The article should have had an “analysis” tag. Or maybe the Times should drop the act and just admit that it’s doing the same thing that TPM is—just with a centrist bias instead of a liberal one.