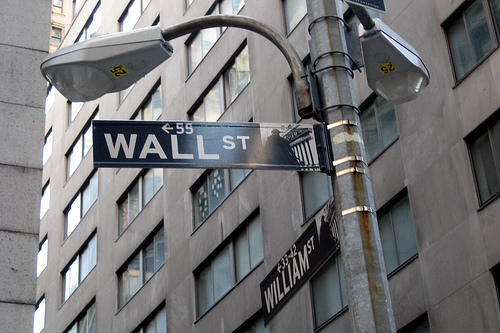 The 10 members of the Financial Crisis Inquiry Commission, the modern heir to the famous Pecora Commission convened in the wake of Wall Street’s 1929 crash, kicked off a marathon set of hearings on Wednesday and Thursday by grilling some of Wall Street’s most powerful executives, the regulators supposedly tasked with reining them in, and outside experts who watched the collapse. What they heard amounted to something of a crash course in the roots of the financial meltdown.

The FCIC is charged with issuing a report on the causes of the crisis—something that the Obama administration has been slow to do. That’s meant probing people like Goldman Sachs CEO Lloyd Blankfein and JPMorgan Chase CEO Jamie Dimon, who both appeared in the FCIC’s first hearing, on what caused the meltdown and what role their banks played in the process. The bankers and officials such as SEC chair Mary Schapiro pointed to a decline in underwriting standards and staggering housing bubble that combined, Dimon said, to help “fuel asset appreciation, excessive speculation, and far higher credit losses.”

One outstanding question about the financial meltdown has been how the subprime collapse spread to the broader economy. Back in 2007, Federal Reserve chairman Ben Bernanke didn’t expect any spillover from the housing crisis at all. Yet as the four Wall Street execs explained at the hearing, the mortgage securitization process—which took people’s actual mortgages and tried to make them behave like fungible assets you could trade just like stocks and bonds—led to vast amounts of Lehman Brothers-like speculation and leverage. The evaluators of these mortgage-backed securities, the credit rating agencies, only fueled the gambling by stamping their highest imprimatur on these shoddy loans. And when people stopped making their mortgage payments and the securities backed by those mortgages went sour, all these overleveraged institutions suffered huge losses that caused some to fail and others to survive only with government help. “In hindsight,” Dimon said, “it’s apparent that excess speculation and dishonesty on the part of both brokers and consumers further contributed to the problem.”

Of course, none of this could’ve happened without the proliferation of cheap cash, low interest rates, and the government’s push for greater homeownership, as seen in its handling of Fannie Mae and Freddie Mac. “The genesis of the problem wasn’t in subprime alone,” Blankfein testified. “Instead, the roots of the damage to our financial system are broad and deep. They coalesced over many years to create a sustained period of cheap credit and excess liquidity.”

Arguably the best hearing over the two days came on Wednesday afternoon, when three finance veterans who sat before Angelides and Co. and didn’t have to worry about parsing their words or pissing off their lawyers offered a refreshingly blunt and unvarnished take on the crisis. Peter Solomon, a long-time investment banker, highlighted the run of deregulation in the decades before the crisis—culminating with the Gramm-Leach-Bliley Act in 1999, which tore down the wall between investment and commercial banks—that allowed institutions to become “too big to fail,” to increase their leverage to dangerously high levels, and to keep all this hidden from regulators who didn’t try all that hard anyway. “Even for insiders,” he said, “transparency diminished so much that firms were not prepared for the extraordinary so-called Black Swan event.”

Inevitably, the FCIC’s hearings pivoted from what caused the crisis to how to prevent the next one. Investor Kyle Bass emphasized the need for regulating over-the-counter derivatives, the complex financial instruments that allowed AIG and Bear Stearns to take on so much leverage, and for letting those institutions face the consequences if those bets go bad. “Capitalism without bankruptcy is like Christianity without Hell,” he said. “There is a role for leverage and for aggressive risk taking in the economy, but that role should be played by firms that are open and susceptible to the risk of insolvency.” As for too-big-to-fail banks, Bass called for a far tougher regulatory system in which these systemically risky institutions would have to take steps to minimize risky investments or sell off certain assets.

FDIC chair Sheila Bair, in Thursday’s final hearing, echoed Bass’ remarks, making the obvious point that the financial crisis laid bare the regulatory system’s failings and inefficiencies. “We must reassess whether financial institutions can be properly managed and effectively supervised through existing mechanisms and techniques,” she said. Bair’s position, however, contrasted with that of the four Wall Street execs, who to no one’s surprise almost unanimously agreed that greater regulation isn’t the answer. Blankfein supported new regulations but warned against implementing an onerous and reactionary plan geared at “protecting us from the 100-year storm;” JPMorgan’s Dimon said he didn’t blame the regulators at all. “The responsibility for the company’s actions,” he said, “rests with the company’s management.”

The commission and its guests hit on a number of other topics pertaining to the FCIC’s fundamental question—who and what is responsible for this crisis?—but the best answer of all came from veteran investor Peter Solomon. “It was a perfect storm from inside. It was a confluence,” he said. “If you listed the number of villains in this tale, you wouldn’t have a plot.”