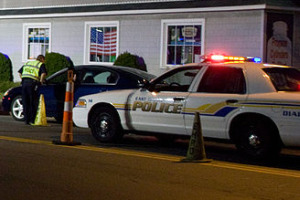 Sobriety checkpoints in California are increasingly turning into profitable operations for local police departments—operations that are far more likely to seize cars from unlicensed motorists than catch drunk drivers. An investigation by the Investigative Reporting Program at UC Berkeley with California Watch has found that impounds at checkpoints in 2009 generated an estimated $40 million in towing fees and police fines—revenue that cities divide with towing firms. In addition, police officers received about $30 million in overtime pay for the DUI crackdowns, funded by the California Office of Traffic Safety.

In dozens of interviews over the past three months, law enforcement officials and tow truck operators say that vehicles are predominantly taken from minority drivers, often illegal immigrants. In the course of its examination, the Investigative Reporting Program reviewed hundreds of pages of city financial records and police reports, and analyzed data documenting the results from every checkpoint that received state funding during the past two years. Among the findings:

• Sobriety checkpoints frequently screen traffic within, or near, Hispanic neighborhoods. Cities where Hispanics are a majority of the population are seizing cars at three times the rate of cities with small minority populations. In South Gate, a Los Angeles County city where Hispanics make up 92 percent of the population, police confiscated an average of 86 vehicles per operation last fiscal year.

• The seizures appear to defy a 2005 federal appellate court ruling that determined police cannot impound cars solely because the driver is unlicensed. In fact, police across the state have ratcheted up vehicle seizures. Last year, officers impounded more than 24,000 cars and trucks at checkpoints. That total is roughly seven times higher than the 3,200 drunken driving arrests at roadway operations. The percentage of vehicle seizures has increased 53 percent compared to 2007.

To be sure, DUI checkpoints have saved countless lives and have brought thousands of drunken drivers to justice. And by inspecting driver’s licenses, police often catch motorists driving unlawfully, typically without insurance. With support from groups such as Mothers Against Drunk Driving, California has more than doubled its use of sobriety checkpoints the past three years.

Law enforcement officials say demographics play no role in determining where those checkpoints are established. Indeed, the Investigative Reporting Program’s analysis did not find evidence that police departments set up checkpoints to specifically target Hispanic neighborhoods. The operations typically take place on major thoroughfares near highways, and minority motorists are often caught in the checkpoints’ net. “All we’re looking for is to screen for sobriety and if you have a licensed driver,” said Capt. Ralph Newcomb of the Montebello Police Department, southeast of Los Angeles. “Where you’re from, what your status is, that never comes up.”

California police have seized the cars of unlicensed drivers for 15 years under the state law that allows such vehicles to be impounded for 30 days. But in 2005, the Ninth U.S. Circuit Court of Appeals ruled in an Oregon case that law enforcement can’t impound a vehicle if the only offense is unlicensed driving. To do so would violate the Fourth Amendment, which protects everyone within the United States, whether they are legal residents or not.

One exception is called the “community caretaker” doctrine, which permits police to impound a car if it poses a threat to public safety, is parked illegally or would be vandalized imminently if left in place. But reporters attending checkpoints in Sacramento, Hayward and Los Angeles observed officers impounding cars that appeared to pose no danger. Many of the drivers who lost their cars at these checkpoints were illegal immigrants, based on interviews with the drivers and police. They rarely challenge vehicle seizures or have the cash to recover their cars, studies and interviews show.

Some tow truck company officials relayed stories of immigrant mothers arriving at impound lots to remove baby car seats and children’s toys before leaving the vehicle to the tow firm. “I have to stand here for days and watch them take their whole life out of their vehicles,” said Mattea Ezgar, an office manager at Terra Linda Towing in San Rafael. By contrast, police do not typically seize the cars of motorists arrested for drunken driving, meaning the owners can retrieve their vehicles the next day, according to law enforcement officials.

The city of Montebello, southeast of Los Angeles, runs checkpoints that are among California’s least effective at getting drunks off the road, the Investigative Reporting Program found. Last year, officers there failed to conduct a single field sobriety test at three of the city’s five roadway operations, state records show. Yet the city collected upward of $95,000 during the last fiscal year from checkpoints, including grant money for police overtime. The California Office of Traffic Safety, which is administered in part by officials at UC Berkeley, continues to fund Montebello’s operations, providing a fresh $37,000 grant for this year.

The state does not consistently collect data on where local police departments set up checkpoints. A majority of California law enforcement agencies declined to release records showing which intersections they target, or what transpired at checkpoints, making it difficult to perform a statistical analysis of seizures in heavily minority communities. But cities across the state operate checkpoints in communities with high minority populations, the Investigative Reporting Program found. Checkpoints in cities where Hispanics are the largest share of the population seized 34 cars per operation, a rate three times higher than cities with the smallest Hispanic populations, the analysis shows. The disparity between vehicles impounds and DUI arrests exist in virtually every region of California.

The federal government provides the California Office of Traffic Safety about $100 million each year to promote responsible driving that reduces roadway deaths. Of that, $30 million goes into programs that fund drunken driving crackdowns, particularly checkpoints. Police overtime accounts for more than 90 percent of the expense of sobriety checkpoints. Statewide, police departments on average deployed 18 officers at each checkpoint, according to state data. The National Highway Traffic Safety Administration advises that police can set up checkpoints with as few as six officers. The additional dozen officers typical at a California roadway operation cost state and federal taxpayers an extra $5.5 million during the 2008-2009 fiscal year, according to the Investigative Reporting Program’s analysis. And the LAPD assigned 35 officers, on average, to every sobriety crackdown.

At least a dozen officers spent hours sitting and chatting at an operation in early January in downtown Los Angeles. A couple of officers smoked cigars as they watched cars go through the screening. Officers seized 22 cars that evening and made one DUI arrest. The state data shows that last fiscal year, the LAPD spent $16,200 per checkpoint, all of it on officer overtime. And the trend shows to no sign of letting up. State officials have declared that 2010 will be the “year of the checkpoint,” and police are scheduling 2,500 of the operations throughout California.

More on this story: