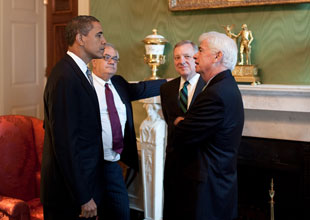 Mother Jones has obtained a copy of Sen. Chris Dodd’s plan to house a consumer financial protection office within the Department of the Treasury rather than creating an independent agency. Several other news sources have received copies, but none have made the leaked document publicly available. We’re posting Chris Dodd’s consumer financial protection plan here (PDF). It seems certain to disappoint experts and progressives who had called for a powerful new agency. (Andy Kroll has more on this.) This is the document’s top-line summary:

Create a [Bureau of Financial Protection] inside of Treasury with a Presidentially-appointed director; a dedicated budget (through assessments on large banks, non-banks, and with the Fed making up the shortfall); autonomous rule-writing authority with the regulations to apply across-the-board to all entities offering financial services or products; and examination and enforcement authority for large banks and mortgage companies, small banks in a back-up capacity, and other non-banks on a risk basis, as described below.

The independent agency proposal would be dropped.

As Andy explained Saturday afternoon, Dodd’s decision to move financial protection inside an existing agency is an effort to gain Republican votes for financial reform. But it’s unclear whether either of the Republicans Dodd has negotiated with to date—Sen. Richard Shelby (R-Al.) and Sen. Bob Corker (R-Tenn.)—will support the new plan. There hasn’t been any hint of GOP backing for the proposal in newspaper articles on Dodd’s leaked plan.

Even if Dodd can convince Republicans to back the notion of a Treasury-based consumer protection office, this proposal could have problems passing the House. Multiple members of the House Financial Services Committee, including its chair, Rep. Barney Frank (D-Mass.), told Andy last week that they were worried about the Senate watering down consumer protection. (Frank said that if the Senate’s financial reform plan did not include a standalone agency, it would be a potential “dealbreaker.”) Now House Dems’ worst fears are already being realized—and as far as anyone knows, Dodd hasn’t even won any Republican votes.