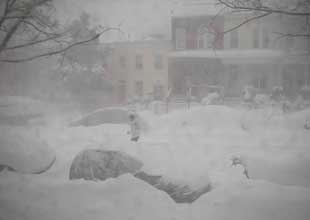 The Snowpocalypse is an inconvenient truth for Al Gore and all those scheming scientists who claim global warming is imperiling our planet, right? I mean look at the epic amounts of snow blanketing the mid-Atlantic! It’s not warm at all! This is essentially the argument some GOPers are making to suggest that climate change doesn’t exist. Kate noted this phenomenon on Friday, when the Virginia GOP ran ads targeting Reps. Rick Boucher and Tom Periello.

The ads mock Boucher and Periello because they “think global warming is a serious problem for Virginia”—so serious they voted to “kill tens of thousands of Virginia jobs just to stop it.” The ad features images of falling snow, stuck cars, and weathermen, and urges viewers to call the congressmen “and tell them how much global warming you get this weekend. Maybe they’ll come help you shovel.”

Politico reports today that conservatives from Mitch McConnell to Sean Hannity to Newt Gingrich have seized upon the “Gore-easter” to slam the climate conscious ex-Veep.

It’s the most severe winter storm in years, which would seem to contradict Al Gore’s hysterical global warming theories.

Historic snow storm in Washington – third this year – where is Al Gore to explain it snows this heavily as a sign global warming is imminent.

Apparently neither Gingrich, Hannity, or others attempting to use Snowpocalypse to score political points have spent much time wondering why the East Coast is in the throws of such a “historic” weather event. Time‘s Bryan Walsh has a good rundown on why Snowmageddon may in fact be illustrating the storm-intensifying perils of climate change.

There is some evidence that climate change could in fact make such massive snowstorms more common, even as the world continues to warm. As the meteorologist Jeff Masters points out in his excellent blog at Weather Underground, the two major storms that hit Philadelphia, Baltimore and Washington, D.C., this winter — in December and during the first weekend of February — are already among the 10 heaviest snowfalls those cities have ever recorded. The chance of that happening in the same winter is incredibly unlikely.

But there have been hints that it was coming. The 2009 U.S. Climate Impacts Report found that large-scale cold-weather storm systems have gradually tracked to the north in the U.S. over the past 50 years. While the frequency of storms in the middle latitudes has decreased as the climate has warmed, the intensity of those storms has increased. That’s in part because of global warming — hotter air can hold more moisture, so when a storm gathers it can unleash massive amounts of snow. Colder air, by contrast, is drier; if we were in a truly vicious cold snap, like the one that occurred over much of the East Coast during parts of January, we would be unlikely to see heavy snowfall.

Climate models also suggest that while global warming may not make hurricanes more common, it could well intensify the storms that do occur and make them more destructive.

Above I’ve included photographic evidence, which my wife snapped from our window this morning, that refutes the Hannity/Gingrich/McConnell crowd. If global warming doesn’t exist, then why does this dude think it’s OK to jog through a blizzard wearing a light, long sleeved t-shirt?