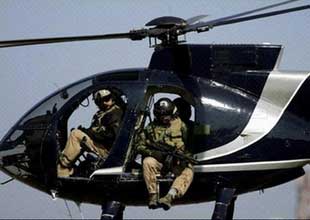 Compared to allegations that Blackwater founder Erik Prince orchestrated hits on informants planning to spill dirt on his company or that executives ran a sex and wife-swapping ring out of Blackwater’s Moyock, North Carolina headquarters, the latest charges against the firm are a bit more mild. A lawsuit, filed by a married couple who worked for Blackwater, accuses the company of keeping a Fillipino prostitute on its payroll in connection with one of its State Department contracts in Afghanistan and chalking her salary up to “Morale Welfare Recreation” expenses. The couple, Brad and Melan Davis, allege that Blackwater (since renamed Xe) and its executives engaged in “systematic” fraud, including falsifying invoices and double-billing (in part through one of Blackwater’s sister companies, Greystone). The suit was filed under the False Claims Act, which entitles whistleblowers who come forward with allegations of fraud to a percentage of any money the government is able to recoup. The Justice Department ultimately decided not to join the Davis’ in the suit, originally filed in 2008, which resulted in the unsealing of records in the case.

As it stands, this case is really the last of Blackwater’s worries. The Justice Department is investigating whether Blackwater execs attempted to bribe Iraqi officials in the wake of the Nisour Square shootings in an effort to ensure the company could continue operating in the country. On top of that, the agency is expected to appeal a federal judge’s decision to dismiss the charges against five ex-Blackwater guards implicated in the shootings. (The Washington Post‘s Del Quentin Wilber has a good piece today outlining how the agency bungled the case.) In a separate case, the Justice Department is pursuing charges against two contractors working for a Blackwater affiliated company, Paravant, for the alleged murder of two Afghan civilians.

In other Blackwater news: Iraq’s interior minister, Jawad Bolani, announced yesterday that as many as 250 former Blackwater contractors, who were employed by the company at the time of the Nisour Square episode but have gone on to work for other firms, have been ordered to leave the country within the next week. According to the Post, this decision is largely seen as political posturing by Bolani ahead of Iraq’s parliamentary elections. Even so, if an anti-Blackwater platform has the power to get candidates elected in Iraq, that raises serious questions about whether the government’s continued reliance on Prince’s security empire is worth the price.