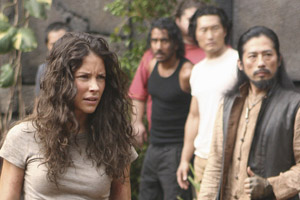 Last night’s episode of Lost raised lots of questions: What’s the “darkness”? Will Sun and Jin reunite anytime soon? And what was up with the return of creepy Ethan? Below, four MoJo staffers puzzle it out:

Laurin Asdal, Director of Development: Can I just start off by saying that I think the best moment of last night’s episode was the last ten seconds? The rest was a snoozefest.
Jen Phillips, Assistant Editor: I agree with Laurin. Welcome to Snoozeville, population: Lost.
Ben Buchwalter, Editorial Fellow: I have trouble adjusting to a one hour non-steroid Lost fest.

Jen: Ethan scared me though, just showing up like that.
Ben: Ethan, still an OBGYN.
Nikki Gloudeman, New Media Fellow: And still creepy. Why was he there? I still don’t understand how these parallel worlds relate to one another.
Jen: I don’t think they are parallel. I think they’re simultaneous.
Ben: Do you guys think he’s still connected to the island… or whatever iteration of the island might exist in this other world? I keep thinking that in this non-island world, there’s still some connection to Jacob, island mysticism, etc.
Jen: That’s a good point, Ben. Kate definitely recognized Jack, and Jack recognized Desmond last week. Why, if not to somehow course-correct in a world where the island is submerged or disappeared?
Nikki: The course-correct theory is interesting…Does that mean these characters are doomed to make the same choices, because fate dictates it? And how will free will play in? I think Jacob and MIB represent not just good and evil, but fate and free will.
Laurin: I think that is quite possible. The use of fate is heavy throughout and the fact the same people are meeting suggest fate in many ways is trumping free will.

Jen: What about the darkness Dagon talked about? Do you think that’s fated?
Nikki: I don’t know if it’s entirely fated, because as we saw with the smoke monster, the darkness (if that’s the same thing) tests people based on the choices they make.
Ben: I thought that was the most interesting part of the episode. I think it has to do with near-death experiences. Claire went through a very similar experience to Rousseau, and seems to be like her now.
Nikki: Do they all end up with darkness?
Ben: And how does Sayid tie in to that darkness?
Jen: One thing another blog brought up is that the Losties got vaccinated when they went back to the 70s. Remember when Ethan gave Aaron medicine in utero on the island? Maybe it was to prevent the darkness?
Ben: It reminds me of the sickness that impacted people traveling from the boat to the island in an earlier season. But that was connected to time travel.

Nikki: One thing I did like about last nights show was the emotional element, with Sawyer/Kate on the dock, and Sawyer talking about proposing to Juliet. I like it when the show has these moments, to ground it.
Jen: Right, seems like they’re getting back to what made first season good.
Nikki: The writers historically do that after explosive premieres.
Ben: It was interesting how Sawyer reverted to being individual now that Juliet is gone.
Nikki: Which means he’s back to season 1 Sawyer.
Laurin: Let’s hope. Season 1 Sawyer was my favorite.

Nikki: I’m sensing a Jin/Sun reunion next week…anyone else?
Ben: Yeah… any guesses about what Sun is up to?
Jen: I’m guessing the beach group and the temple group will meet somewhere in the jungle just like in, oh, several other past episodes.
Laurin: I kind of love the juxtaposition of the Sun on the island desperate to reconnect to Jin, and the Sun in “real life” trying to escape him.
Ben: Yeah… really excited to see more about that soon. And to see if Jin undergoes a similar transformation in “real life” as he did on the island.
Jen: The island gave them a chance to reconnect, through Sun’s pregnancy. So without that…?

Nikki: Ok…favorite moment of the show? I’d say Kate/Sawyer on the dock.
Ben: Miles grumbling about how Hugo is the leader.
Jen: “Are you a zombie?”
Laurin: The guy, at LAX, crossing in front of the cab saying in his worst New York accent, “Hey, i’m walking here!”
Nikki: Was that Arszt?
Jen: Yes, all in one piece.

Nikki: I kind of want to talk about next weeks episode…looks like we might learn more about Richard.
Laurin: Let’s hope so. Like what kind of eyeliner does he use. He seems like a liquid man to me.
Nikki: That is the key question of Lost, I think. That, and “What is the island?”
Jen: I hope we leave the temple, though. Dogan’s Japanese is terrible and those folks bug.
Laurin: They bug hard.
Nikki: Yes, im not a fan of the temple. It’s a little cheesy.
Laurin: It’s like a bad Temple of Doom.

Ben: For the record, I don’t think Juliet is really dead.
Jen: Really? Juliet comes back, you think? So will the series end with a wedding?
Nikki:: A very special episode of Lost? I hope not.
Ben: I hope Ross and Rachel attend.