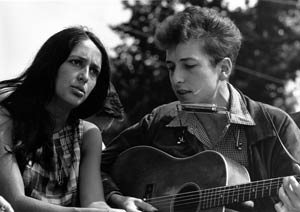 If you’re the type that likes to extrapolate complex political messages from presidential musical performances (and, really, who doesn’t?), Bob Dylan’s performance at the White House earlier this month probably caught your attention. He may not have eclipsed Bill Clinton’s rendition of “We are the World,” but, coming as it did on the heels of one of the worst albums…maybe ever, vintage Dylan was a welcome sight to see. If there was one flaw, though, it was the song selection: “The Times They Are A-Changing'” might have captured the mood just right in 2008, but it seemed a bit too “hopey-changey” for the depressed political landscape of 2010. Dylan could have struck a better chord with something much more obscure: “Talkin’ John Birch Paranoid Blues.”

That’s not just my liberal frustration talking. After decades of well-deserved irrelevance, the John Birch Society has undeniably experienced something of a renaissance over the last year, culminating in the group’s participation in—and co-sponsorship of—last week’s Conservative Political Action Conference (CPAC). As the Washington Independent‘s Dave Weigel noted, as recently as “two years ago, RedState.com blasted Ron Paul for endorsing the ‘conspiracy nuts’ of the JBS. One year ago, National Review’s John Derbyshire implied that it was a vile smear to connect Ron Paul to the Birchers.” Now, Birchers are more than welcome at an event that, according to its organizers, brings together all of the “leading conservative organizations and speakers who impact conservative thought in the nation.”

Today’s Birchers are, hopefully, a bit more sedated than the sort that once asserted that Dwight D. Eisenhower was a “dedicated, conscious agent of the communist conspiracy.” But even if they’ve moderated their message, a small army of groups has emerged to carry the banner of the conspiracy-flinging fringe. “Small army” is not an exaggeration, either: As Justine Sharrock reports in the latest issue of Mother Jones, Patriot groups like the Oath Keepers have sprung up amid fears that a global government—enforcing its tyrannical rules with the help of UN blue helmets—is imminent. Meanwhile, elected officials and talk show hosts have called President Obama a socialist with impunity while raising the spectre, John Birch-style, of concentration camps. The fear of government has grown so large that even John Birch darling Ron Paul is facing three challengers from the paranoid Tea Party movement he started.

In that context, “Talkin’ John Birch Paranoid Blues” captures the conservative movement’s embrace of the fringe as if it were only just written last week, perhaps for an extra special episode of Glenn Beck. Dylan’s narrator looks for communists everywhere—under the bed, in the recesses of his toilet bowl, and stuck inside the television. Finally, his search turns inwards, and he frets that he, too has caught a case of the commies. Give it a listen.