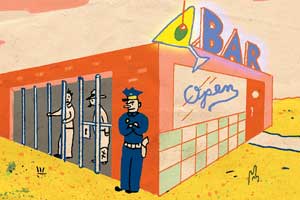 LATE ON A BALMY Saturday night last June, six Fort Worth cops and two officers from the Texas Alcoholic Beverage Commission went looking for trouble. They had just raided two Hispanic bars in an industrial stretch of town and nine detainees now sat in the paddy wagon (pdf), hands bound with plastic ties. The rest of the city’s bars would soon shut down. It seemed like the night was over, except for the paperwork. Then Sergeant Richard Morris had an idea. “Hey,” he said. “Let’s go to the Rainbow Lounge.”

A half-dozen police cruisers, an unmarked sedan, and the prisoner van slid to a stop in front of the Rainbow Lounge, Fort Worth’s newest gay club, at about 1:30 a.m. on June 28, 2009—40 years, almost down to the minute, after New York City police raided the Stonewall Inn with billy clubs and bullhorns. Inside the bar, the officers fanned out, grabbing and arresting six patrons for public intoxication. Benjamin Guttery, a 24-year-old Army vet, says an officer told him to put down his drink, then “bulldozed” him through the crowd to the paddy wagon but then let him go. “I’m 6’8″, 250 pounds, and I had just finished my second drink,” Guttery told a local reporter. “I might have had enough to have a loose tongue, but not a loose walk or anything like that.” Another man alleges that he was slammed against a wall, elbowed, and fell on the ground, landing him in intensive care for a week with bleeding in his brain. He was charged with public intoxication and assault.

They say everything’s bigger in Texas, and that includes absurdity in law enforcement. Most states and towns have public intoxication laws that allow peace officers to pick up the drunk and disorderly. But in the Lone Star State, the nation’s broadest PI law lets cops go virtually anywhere and arrest anyone for drunkenness—even if they’re quietly nursing a beer in a bar.

Arrested for drinking in a bar? Sounds like the ultimate catch-22. Since 2006, when Texas overtook California as the state with the most drunk-driving fatalities, cops and a beefed-up task force from the state Alcoholic Beverage Commission have used a 1993 law as a pretext to enter any bar and arrest its patrons on the spot. The public intoxication standard, backed by the Texas-based Mothers Against Drunk Driving, is so broad that you can be arrested on just a police officer’s hunch, without being given a Breathalyzer or field sobriety test. State courts have not only upheld the practice but expanded the definition of public intoxication to cover pretty much any situation, says Robert Guest, a criminal defense attorney in Dallas. “Having no standard allows the police to arrest whoever pisses them off and call it PI,” he says, adding, “If you have a violent, homophobic, or just an asshole of a cop and you give him the arbitrary power to arrest anyone for PI, you can expect violent, homophobic, and asshole-ic behavior.”

For some officers, PI has provided a ready-made reason for detaining minorities. A Houston defense attorney, who asks to be unnamed since he specializes in misdemeanors such as PI, puts it this way: “If you’re brown and you’re around—you’re going down.” Nick Novello, a 27-year veteran of the Dallas Police Department, blew the whistle on three colleagues who he claims filled their arrest quotas by picking up people, mostly minorities, for PI. “They were illegally arrested,” Novello says. “It’s an absolute perversion.” (Two were removed from the force.)

According to a recent report by sociology and law professors at the University of California-Berkeley, the Dallas suburb of Irving has used “discretionary” public intoxication arrests to fish for undocumented immigrants. After partnering with federal immigration officials in 2006 to check local prisoners’ residency status, Irving police increased the number of Latinos they nicked for PI and other Class C misdemeanors by 150 percent, while arrests of whites and African Americans for those offenses fell. The Mexican consul issued an advisory telling migrants to avoid Irving. “In this city, one has to be extra careful,” he told a Spanish-language newspaper. “They were clearly choosing to bring more Hispanics into jail,” says Aarti Kohli, coauthor of the Berkeley study. But the feds and local officials hailed the PI sweeps as a victory. Immigration “is expanding this program, saying, ‘Isn’t this great?'” Kohli says. “But the question they’re not asking is: How are these people getting put into jail?”

After community activists took to the streets and airwaves, Irving’s arrest rate for Hispanics plummeted. (Dallas and Irving are no longer part of the federal program.) In Fort Worth, protests over the Rainbow Lounge raid elicited a quick apology from the police chief and promises to review the PI policy. But the arrests have continued elsewhere, and no one is targeting the public intoxication law itself. Many people don’t care, Novello says, “because they can’t vicariously experience this injustice.” The Houston attorney puts it more bluntly. “As long as police are going out there fucking with the blacks and the Mexicans, until it hits the people with the power, they won’t care.”

Adam Weinstein is Mother Jones‘ new copy editor. Before coming to Mother Jones, he worked at the Wall Street Journal, the Village Voice and the Tallahassee Democrat. His writing has also appeared in the New York Times and on Newsweek.com. A Navy veteran, two-day Jeopardy champion and seasoned ne’er-do-well, he’s currently at work on a book about his recession-fueled stint as a military contractor in Iraq. Welcome, Adam!