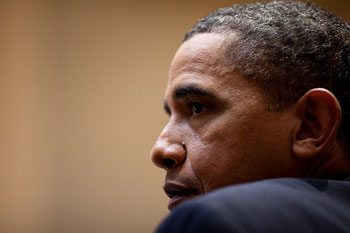 The face of weakness? | White House photo/Pete Souza (Government Work).On Thursday night, before members of Congress left town for a week-long recess, the Senate confirmed 29 of President Barack Obama’s nominees for administration positions. At the beginning of the week, over 60 nominees were waiting for Senate confirmation. More than 30 nominations remain stalled, but Obama has promised not to use his “recess appointment” privilege to appoint them while the Senate is in on vacation. The 29 nominations that were approved are considered noncontroversial; they were approved by unanimous consent after Obama threatened to use the recess appointment power to push them through.

Democrats are trying to paint this as a win—Politico crowed about Obama’s “forceful gesturing” at the Cabinet room table in a piece about the “showdown” with Sen. Mitch McConnell, the Senate minority leader—but if it’s a win, it’s really small potatoes. Remember, these nominees were uncontroversial—even the most right-wing Republicans hadn’t come up with reasons to oppose them. Still, in exchange for their confirmation, Obama  promised not to use his recess appointment over the coming week. The whole exercise reeks of weakness. As Matt Yglesias points out, the President could push through all his nominees using recess appointments if he wanted—”the authority to do that is right there in the constitution.” Dems don’t want to do that because they whined about President Bush’s use of recess appointments when he was in office, and they’re worried the Republicans will accuse them of hypocrisy.

Worrying about what the GOP is going to say about them always seems to get in the way of the Democrats actually getting things done. But it’s still unclear to me why Democrats worry so much about that. Aren’t Democrats in politics to get their agenda enacted? Matt Yglesias says no:

Republicans, to their credit, tend to prioritize their vision of the national interests over issues of process and ego. Democrats, by contrast, seem to have mostly gotten into politics in order to bolster their own sense of self-righteousness and aren’t especially concerned with whether or not their conduct in office is efficacious.

This is particularly sad because 59 Senators, 250+ Representatives, and a president all from the same party can do just about anything if they have the political will and party unity to do it. (Democrats, is seems, don’t.) Obama could fill almost all federal vacancies using recess appointments. Democratic Senators could invoke the “nuclear option” and kill the filibuster tomorrow if they could get 50 votes to do it.

Where there’s the political will, there’s almost always a way. That’s why Ezra Klein is wrong to argue that since Obama has described recess appointments as a “rare” but “not unprecendented” step, the White House will have trouble using recess appointments in the future. But all Obama’s statement does is open him up to attack from Republicans. It doesn’t preclude him from using his recess appointment power—as long as he’s willing to take the heat. And that’s all it would be: sound and fury. Does anyone really think that recess appointments are going to be a crucial issue at the polls in 2012? Of course not. But the mere threat of GOP criticism seems to be enough to stop the Democrats in their tracks. Whatever happened to “strong and wrong” being better than “weak and right”?