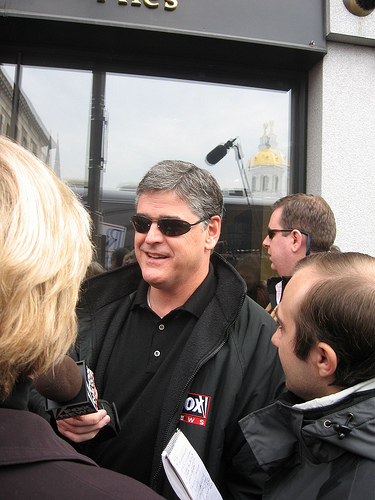 Sean Hannity is proud of noting that “every penny” from his Freedom Concerts goes to scholarships for the children of killed or injured veterans. But in a legal complaint filed today, Citizens for Responsibility and Ethics in Washington (CREW) and VoteVets dispute that claim.

The concerts, which are presented by the Fox News star and feature entertainers such as Lynyrd Skynyrd, purportedly donate their entire proceeds to Freedom Alliance, a non-profit led by Lt. Col. Oliver North. In turn, Freedom Alliance says it directs all of this money to a scholarship program for veterans’ kids. “Every penny, 100 percent of the donations are applied to the Freedom Alliance scholarship fund,” Hannity has claimed. North has made similar statements, remarking, “There’s no overhead. There’s no expenses taken out. Every penny that’s donated or that’s raised through things like the Freedom Concerts goes to the scholarship fund.” (A giant “Thank you! Sean Hannity” currently appears on Freedom Alliance’s homepage.)

CREW’s complaint, lodged with the Federal Trade Commission (FTC), alleges that Hannity and Freedom Concerts have been dishonest in suggesting that the entirety of the revenues from ticket sales goes straight to a scholarship fund. Freedom Alliance does not actually manage the concerts, Crew discovered via a Freedom of Information request and promotional materials. Instead, they’re organized by a middleman—a promotional company called Premiere Marketing. The firm is headed by Duane Ward, who is also the president of Premiere Motivational Speakers Bureau, which represents both Hannity and North and has a “long history in conservative activism.” Ward previously worked for Jerry Falwell’s Moral Majority and ran North’s legal defense fund following the Iran-Contra scandal in the late 1980s. Premiere in turn donates an “unknown portion of the concert proceeds to the Freedom Alliance,” alleges CREW. “We have no idea how much money it actually is,” CREW executive director Melanie Sloan told reporters on Monday. But CREW argues that Hannity and Freedom Alliance’s claims that the revenues go directly to scholarships amounts to “illegal and deceptive marketing practices.”

In a conference call, CREW said its investigation indicates that Hannity and Freedom Alliance have “spent much more money on fund-raising and mailing” than on actual donations. CREW also alleges that Freedom Alliance has misled contributors about the sums they’ve given directly to the fund through concerts and other donations.  The government watchdog’s investigation found that Freedom Concerts held in 2009 in Texas and Nevada grossed $621,792 and $520,840, respectively. If every concert grossed a low-end estimate of $500,000, the 18 concerts since 2003 would have brought in a cool $9 million. However, on its tax forms, Freedom Alliance claims to have only given $2.5 million to the scholarship fund since 2003. (CREW estimates that the group could not have given more than $2.1 million during this period.) CREW also found that the ticket price for at least one concert included a $4 “fee” that went to the Alliance as a donation and not to the scholarship fund.

CREW has also filed a second complaint with the Internal Revenue Service arguing that North’s Freedom Alliance has violated its status as a 501(c)3 charity by “engaging in prohibited political activities.” When the group was first formed in 1999, the IRS granted it charitable tax status on the condition that it remove politically partisan material from its website, CREW notes. However, there are still numerous links on the organization’s website to North’s charged political columns. The group also sells its mailing lists to conservative communications firms like Eberle & Associates (“America’s Trust Conservative Fund Raiser”) and and the Richard Norman Company (“the premier communications firm for candidates, non-profits, PAC’s, and affiliated organizations that seek to reach Republicans and conservatives across the United States”). And it hosts an annual “Freedom Cruise” with top Republican politicians—including former House Speaker Newt Gingrich and Republican National Committee chairman Michael Steele. CREW’s investigation into the group’s tax forms also turned up a questionable relationship with Team America PAC, the anti-immigration group run by former Republican Rep. Tom Tancredo (Col.) and Bay Buchanan.

Some of the accusations in CREW’s complaints echo those raised by right-wing blogger Debbie Schlussel, who has also questioned whether Freedom Alliance really donates all the concert proceeds to scholarships. Freedom Alliance has dismissed those questions as baseless. “The smear-mongers who have launched this politically motivated witch hunt against Freedom Alliance will be proven wrong as we aggressively defend ourselves in the days and weeks ahead,” said Freedom Alliance President Tom Kilgannon in a statement.