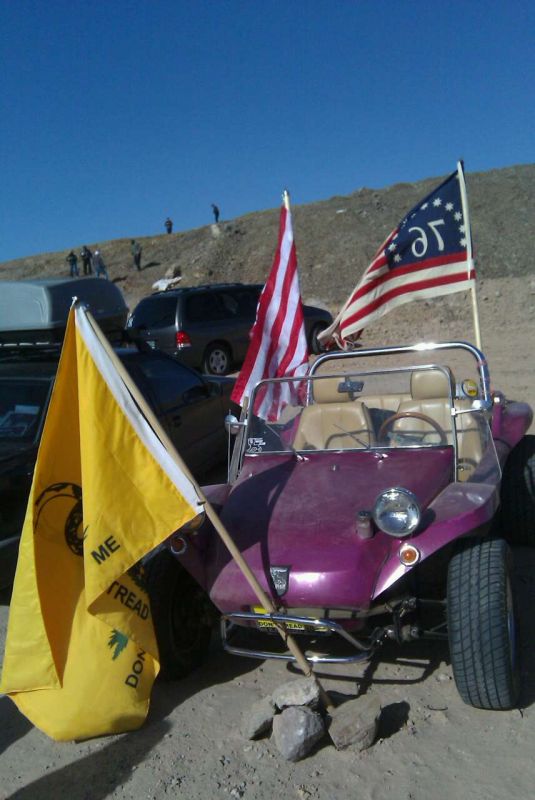 The Showdown in Searchlight just wrapped up, although things pretty much climaxed with the rousing chants of “Sa-Rah, Sa-Rah” as Sarah Palin finished her speech earlier. That’s when the event began to empty out—the subsequent list of speakers (Joe the Plumber, Angela McGlowan, distinguished musical guests) either offered standard boilerplate rhetoric, or they appealed to only a fraction of the attendees. (For instance, nearly every single one of Harry Reid’s potential GOP challengers were given five minutes to make they case for why they disliked Searchlight’s native son the most.)

Everyone said kind of the same thing, that is, except for Washington Times’ Andrew Breitbart, who, as Andrew Breitbart is wont to do, fired a rather audacious salvo during his 10-minute address. Breitbart promised the audience he would donate $100,000 to the United Negro College Fund if anyone could come forward to verify John Lewis’ assertion that protestors had called him the “N-word.” It would also be fine with him, he said, if John Lewis would take a polygraph test (and pass). The assertion that Rep. Lewis simply made the whole thing up—or worse, that Democratic operatives planted the offending hecklers, was a recurring theme among the people I spoke with today (a few souls generously allowed that the Civil Rights icon may have simply misheard), but Breitbart really played it up. As he put it, by smearing health care opponents, “they’re calling us the n-word,” Breitbart said. Yeah, totally.

As for Palin, you’ve heard much of the speech already, which is fortunate, because three circling helicopters drowned out some of her choicest lines here in the desert. (This prompted a woman behind to allege that the choppers were democratic plants, possibly sent by Harry Reid himself, which, in turn, prompted a few more attendees to “mmhmm” in affirmation. But Palin did have a new old message for the “lamestream media”:

“Freedom is a God-given right and freedom is worth fighting for. This is not a time to retreat. It’s a time to reload.”

Duck and cover! But wait, she continued: “Now, media, try to get this right: It’s not inciting violence; It’s telling people to get involved.”

She’s right, to a point: This really wasn’t a violent (or, at least superficially, racist) event; any representation that says otherwise would probably be inaccurate. Oath Keepers was there with their German Shepherds and outfitted Jeeps, as were a few gun nuts, but as someone (Hawthorne, I think) once put it, there’s nothing so unthreatening as a greying Middle American in a lawn chair. But I can’t see any outcome in which simultaneously promoting right wing extremism (“Right Wing Extremists” is a top song from a Tea Party Express performer) and pretending there’s no such thing as right wing extremism, is a net positive for America.  (Read part I, II, III)