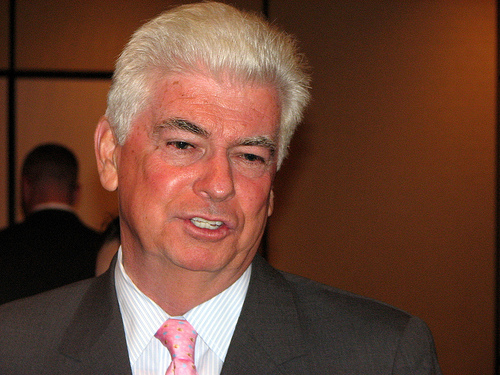 When Sen. Chris Dodd (D-Conn.) unveiled his financial reform bill last Monday, among the numerous reforms included—an independent Consumer Financial Protection Bureau, greater say on executive compensation, a risk council created to prevent too-big-to-fail situations—was a version of what’s called the “Volcker Rule.” Named for the former Federal Reserve chairman Paul Volcker, the rule in Dodd’s bill would ban insured banks from engaging in risky proprietary trading (i.e., trading for their own gain, as opposed to trading for their customers—a practice rife with conflicts of interest) and sponsoring casino-like entities like hedge funds and private equity funds. But there was a rub: Instead of mandating the “Volcker Rule,” Dodd’s bill requires a six-month study by the newly created financial risk council, after which the council will recommend whether or not to implement it. That study, as some observers see it, would more likely kneecap or kill the Volcker Rule than anything else.

A look at the nearly 400 amendments offered by senators on the banking committee, which begins marking up the bill this evening, shows the Death-By-Study strategy could become a tool to blunt financial reform. Sen. Richard Shelby (R-Ala.), the top GOPer on the banking committee, is the king of the study so far, judging by nine study-related amendments he’s offered. Among others, he’s requested studies to replace: the SEC’s rulemaking power on arbitration, mandatory pre-dispute arbitration, and the Volcker Rule. Sen. Kay Bailey Hutchison (R-Tex.), in addition to requesting an exemption for banks with $150 million or less in assets from the Sarbanes-Oxley Act, which tightened accounting and disclosure standards for public companies, wants a study to see whether banks with $700 million or less shouldn’t be exempted, too. An amendment offered by Sen. Bob Corker (R-Tenn.) would move an existing bankruptcy study in the bill from the tough, independent Government Accountability Office to the financial risk council, which is headed by top financial regulators.

That’s not to say all proposed studies are intended to blunt the bill. One of Dodd’s amendments would require the GAO to study the “Repo 105” accounting gimmick, a trick used by Lehman Brothers to cook its books and make it look healthier than it really was. Another study, by Corker, would require the GAO to study the government’s role in propping up the troubled housing twins, Fannie Mae and Freddie Mac, a backstopping effort costing the government $125 billion.

But on the whole, as the banking committee begins tweaking and changing Dodd’s financial reform bill (which we’ll be covering here), keep an eye on any suggestions to replace mandatory rules or authority with “studies.” Those studies could be just another way for the bill’s opponents to punch holes in what’s currently a relatively tough piece of legislation. And if they succeed, the bill could emerge from committee looking more like a piece of Swiss cheese than a Wall Street overhaul.