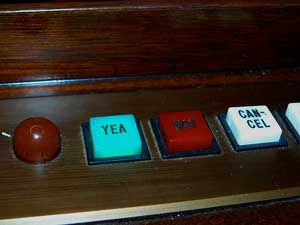 President Barack Obama kicked off the final push on health care with a speech at the White House Wednesday. Basically, the plan now is for the House to pass the Senate health care bill, and then for the Senate to pass a package of changes to the bill through the filibuster-proof process known as “reconciliation.”

As you know if you’ve been following this, the big question is whether the Senate bill has the votes to pass the House.

The House passed its health care bill by the narrow margin of 220-215 in November. Since then, three members—two Dems and one Republican—have left the House, and one Democrat, Jack Murtha of Pennsylvania, passed away. Theoretically, that brings the vote to 217-214. But Rep. Anh Cao (R-La.), the only Republican to vote for the original bill, has said he won’t vote with the Dems again. That makes it 216-215.  As I have previously reported, it seems clear that Rep. Bart Stupak (D-Mich.), the author of the House health care bill’s tough anti-abortion language, will oppose the Senate bill because he believes its abortion restrictions are not stringent enough. Stupak claims to have other Dems that previously voted yes on health care reform ready to switch, but House Dem staffers and Speaker Nancy Pelosi have expressed doubts about how many of those people might actually break ranks.

So, until this afternoon, absent any vote switchers other than Stupak, the vote in the House stood 216-215 against the bill.

Then came the news that Rep. Eric Massa (D-N.Y.) plans to resign in the wake of allegations that he sexually harrassed a staffer. Despite his avowed liberalism, however, Massa voted against the health care bill the first time around. That makes the vote count 215-215. So while the Massa sex scandal is terrible news for the Democrats narrative-wise, it’s actually good news for the health care vote count. It takes away a no vote.

But even Massa’s resignation won’t be enough to pass the bill. Pelosi will still have to find at least one Democrat who voted against the bill the first time around to switch his or her vote. She’ll also have to prevent any Democrats from switching their “yes” votes to “nos”—or find no-to-yeses to offset them. (Rep. Michael Arcuri, a Democrat from New York, told the Utica Observer-Dispatch on Wednesday that, absent “dramatic changes” to the bill, he will switch his “yes” to a “no.”)

So where can Pelosi find more potential “yes” votes? On Monday, the Associated Press ran a story listing 10 Democrats who said they were undecided about possibly switching to “yes” votes. And as Jonathan Chait noted at the time, not all Dem “no” votes responded to the AP’s query, meaning “the universe of potential N to Ys is larger than 10—the 10 who said they could potentially switch, plus another several who won’t say.”

The AP story is a useful piece of reporting, but for my money, the best full rundown of all the potential vote switchers is at Daniel Nichanian’s Campaign Diaries blog. Check it out.