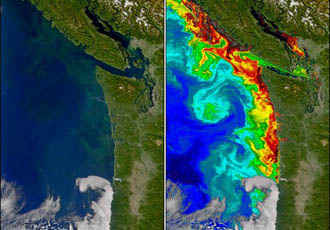 Bad news this week for the cheerleaders of a carbon-capture technique known as iron fertilization. That’s where you spread tiny bits of the nutritious metal over the sea surface, encouraging the birth of phytoplankton blooms. As they grow, these single-celled creatures—the bottom link in the ocean food chain—suck up carbon dioxide from the atmosphere and incorporate it into their tiny little selves. When they die, the theory goes, they sink to the frigid ocean depths where they are trapped, taking the carbon out of circulation. Presto!

But that last bit is pretty speculative, and iron fertilization comes with unintended consequences. In her MoJo report on the unproven technique—which has raised the ire of, among others, the Sea Shepherd Conservation Society (a group best known for its salty founder and its standoffs with whaling vessels)—Melanie Haiken spoke with a number of scientists who were concerned about potential side effects:

Some computer models predict that iron fertilization could bring about the production of greenhouse gases such as nitrous oxide and methane. Other concerns: Seeding may stimulate growth of toxic species, alter the marine food chain, and lead to the depletion of deep-water oxygen. In short, toying with the world’s largest ecosystem would affect the natural balance upon which larger species, including humans, depend.

Funny about those toxic species, because a study published this week in the Proceedings of the National Academy of Sciences notes that a major species of poisonous phytoplankton—one whose toxin is dangerous to fish, birds, ocean mammals, and humans (think tainted shellfish)—produces far more of its nasty stuff after it is exposed to iron. The results are “an indication that we are not masters of nature,” one of the authors told San Francisco Chronicle science reporter David Perlman.

The research team’s rivals aren’t convinced. “It’s a great paper,” marine scientist Kenneth Johnson told Perlman. “But I remain a proponent of iron fertilization—if it does indeed work on a very large scale—because it’s the only process that takes carbon dioxide out of the atmosphere.”

Yes, but for how long? Nobody has yet demonstrated whether the phytoplankton will truly reach the frigid ocean depths as advertised, or whether they will get eaten before they make it, or something else. “It’s just as likely that currents would carry the plankton back up to the surface, where they would release the CO2 back into the atmosphere,” Penny Chisholm, an environmental studies professor at Massachusetts Institute of Technology, told Haiken.