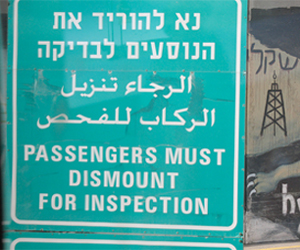 When you spend a lot of time in Iraq as I have—or, alternatively, when you spend a lot of time in the US hanging around certain war hawks who never spent time in Iraq—you’re bound to hear about the concept of wasta. It’s an Arabic term, one that roughly translates to “pull” or “clout,” and it usually refers to one’s standing to deal with the local mover-and-shaker sheikhs. But to hear the neocons tell it, wasta is the reason we went to Iraq, the reason we support Israel’s most imprudent iron-fist moves, the reason for George W. Bush’s cowboy diplomacy: It’s that sandy, desert-heat-tempered combination of “old hatreds, confessional violence, ethnic bigotry and a culture of corruption” that only comprehends strength and only respects violence. Thugs like Saddam Hussein, Hamas, and the Al Aqsa Martyrs had wasta in the Arab world, and the only way to spread American- or Israeli-style democracy in the region was to win the wasta war. Hence the original neocon’s cry, “peace through strength.” The Arab will respect us as soon as he’s been “liberated”—or, if necessary, broken—by us.

Ignore the racism implicit in that worldview for a minute, and just take the neocon thesis at face value. Because there’s good news and bad news. The good news is, in some sense, they were right: It turns out sentiment toward the US on “the Arab street” largely depends on how powerful America appears. The bad news is, Arabs think America’s wasta is pretty much at an all-time low. And the reason for US weakness is not a Democratic administration: It’s the failure of the neocons’ grand game.

How do we know? According to Foreign Policy‘s Mark Perry, Gen. David Petraeus, the chief of US Central Command, had his staff brief Joint Chiefs Chairman Adm. Mike Mullen in January on Arab-Israeli affairs. The point of the presentation, Perry says, was to stress how bad things had gotten:

The 33-slide, 45-minute PowerPoint briefing stunned Mullen. The briefers reported that there was a growing perception among Arab leaders that the U.S. was incapable of standing up to Israel, that CENTCOM’s mostly Arab constituency was losing faith in American promises, that Israeli intransigence on the Israeli-Palestinian conflict was jeopardizing U.S. standing in the region, and that [US negotiator and former senator George] Mitchell himself was (as a senior Pentagon officer later bluntly described it) “too old, too slow…and too late.”

That the US military is now dipping its feathers in these controversial waters tells you just how far our standing has fallen in the Middle East, and how much of a threat has been posed to our security by neoconservative overreach. The message seems to be that peace can come through strength…but contrary to what Bill Kristol, Charles Krauthammer, and Fox News might have you believe, strength doesn’t come from annexing Iraq as a 51st state. Or from rolling over to the anti-Palestinian whims of Israeli Likudniks like Arik Sharon and Bibi Netanyahu. (Our own estimable Kevin Drum the other day expressed his disbelief that Netanyahu could show up Vice President Joe Biden as he did last week in announcing new Israeli settlements in East Jerusalem.)

Hopefully, Petraeus’ concern is also a sign of changes to come in the US-Israel relationship—changes that will truly favor American security. “There are important and powerful lobbies in America: the NRA, the American Medical Association, the lawyers — and the Israeli lobby,” Perry says, “but no lobby is as important, or as powerful, as the U.S. military.”