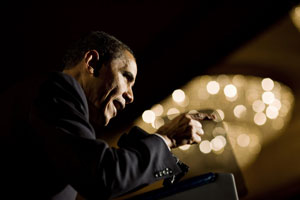 After a long and epic national debate, the House of Representatives made history by voting 219-212 for the final health care reform package shepherded by President Barack Obama. But is the debate over? Just because the president’s health care plan is about to become law doesn’t mean all the yelling is done. Republicans have declared that a central theme of their 2010 campaign pitch will be repealing the legislation. Their denouncements of this supposed “government takeover” of the health care system will not fade. And Obama and his fellow Democrats will be compelled to keep selling the measure. But might this never-ending debate shift in a new direction once all the voting is completed?

It’s often easier to frighten people—and that includes voters—about the unknown than the known. For a year, Obamacare, as the president’s critics call it, has been a bogeyman for conservatives, who have bashed it as a 2,700-page Bolshevik plot that includes (at least according to Sarah Palin) death panels. They portrayed the complex bill as a looming threat to the nation, even when it was unclear what would be in the final version. The aim was to take advantage of the uncertainty and to exploit anxiety about change. Given the scope of the initiative, the foes could zero in on what they thought would be the scariest aspects (real or hyped), thus defining the overall measure in the most dire terms.

But days before the final House vote in the House, former Virginia Governor Tim Kaine, the chairman of the Democratic Party, stood outside the West Wing of the White House following a meeting with Obama, and maintained that the debate would turn once the legislation was passed. As head of a political party facing tremendous headwinds as it nears the November congressional elections—with unemployment likely to stay high until then—Kaine has a keen interest in keeping this particular hope alive. But he also has a case.

Kaine insisted that passage of the bill will be “a positive” for his party because the “American public rewards problem-solvers.” He noted that as soon as the measure clears Congress and is signed into law by the president, the public will see “immediate deliverables”—that is, provisions that will kick in right away and provide relief to businesses and consumers facing health care insurance troubles. In recent days, it has seemed as if practically every Democrat in Washington has memorized this list: tax credits for small business owners purchasing health insurance for their employees, banning insurance companies from booting customers when they get sick, prohibiting those companies from denying coverage to children with pre-existing conditions (the same prohibition relating to adults will come later), ending lifetime limits on health care benefits, filling the so-called Medicare prescription drug “donut hole,” allowing young people to remain on their parents’ policies until their 26th birthday, and more.

“People will see all this,” Kaine said. “If they’ve been wondering, is there a death panel, they will see the answer is no. If they’ve been wondering if this is a big government takeover that gets between a doctor and a patient, they will see the answer is no. Passage of the bill will expose that what the other side said is a phantom.” It may take years to determine if the bill will achieve several of its core aims: restraining health care costs, reducing the deficit, and extending affordable and decent coverage to 31 million people. In the meantime, there will be here-and-now results that can be judged.

And they’re likely to be popular—helping seniors with prescription drug costs, helping young adults remain covered, helping consumers facing abusive insurance companies. Will Republicans find it effective to campaign on dumping all this? As House members prepared to vote for the measure on Sunday evening, Tea Party demonstrators outside the Capitol chanted, “In November, we’ll remember.” No doubt, the passions of many of these Obama-bashers will not cool. But come election time, will independent voters—that wishy-washy bloc that can shift its allegiances and attentions quickly—remember the scare-’em rhetoric of the opponents? Or might they be appreciative of health care reform’s new and significant benefits?

There’s no predicting. But Republicans might ponder that question before revving up a “kill-the-bill” crusade. In a column written hours before the House passed the bill, neoconservative David Frum referred to health care reform as the GOP’s “Waterloo.” He noted that “it’s a good bet that conservatives are over-optimistic about November” because “by then the economy will have improved and the immediate goodies in the healthcare bill will be reaching key voting blocs.” Frum’s j’accuse! blamed “conservatives and Republicans ourselves” for making a poor strategic decision: “We would make no deal with the administration. No negotiations, no compromise, nothing…We followed the most radical voices in the party and the movement, and they led us to abject and irreversible defeat.” Republican legislators who wanted to cut a deal, he notes, were trapped and pinned down by “conservative talkers on Fox and talk radio.”

Frum speaks for no one but himself. Like the Pope, he has no troops of his own. But if his comments reflect a wider sentiment within Republican circles, it’s possible the GOP could be struck by an internal division over the health care reform fight: Do Republicans move on, or do they act like those fabled Japanese soldiers stranded on deserted islands at the end of World War II who never realized the war was over and that they had lost?

And then there is the other end of the Republican political spectrum: Sarah Palin. The day before the vote, the woman who decried the non-existent “death panels” began tweeting that the health care bill would undercut medical plans for military personnel. Representative Ike Skelton, the Democratic chairman of the House armed services committee, says this is not true and would introduce legislation to guarantee this. But it appeared as if Palin was looking for another killer talking point. Other strategists and leaders on the right will be doing the same.

And think of all the anecdotes-as-ammo to come. Both sides in the months—and probably years—ahead will be trolling for stories that will bolster their positions. A government bureaucrat makes a wrong call about anything related to the health care overhaul, and Republicans and their talk show allies will go to town. Democrats, for their part, will embrace any testimonials from Americans whose lives were saved due to changes brought about by this bill.

There’s little argument among the politerati that Obama lost the message war on the stimulus. He passed about $800 billion in spending and economists say it prevented the loss of 2 million or so jobs. Yet the Obama White House was out-maneuvered by the GOP leadership to such an extent that polls repeatedly showed that most Americans didn’t believe that this major initiative had done much, if any, good. Can the White House do a better job with health care reform? Presumably, Obama and his aides have learned from the stimulus battle. And the direct benefits of the health care bill might be more discernible to the public.

The clash over health care reform has been too intense for it to subside, even after a bill is passed. (Shortly before the House vote, Rep. Paul Ryan, a Wisconsin Republican, suggested that passage of the bill would lead to the downfall of the United States.) In some ways, this battle has been a continuation of the heated political culture wars of the 2008 campaign. The passions that fueled both are not going away, and there will be two sides to this spinning coin. Can the Democrats engineer a narrative pivot and nudge the discourse toward the issue of who supported the immediate benefits of the bill and who did not? Can the Republicans sustain their campaign depicting health care reform as an un-American socialist takeover rammed through Congress by an out-of-control and arrogant majority party?  As the never-ending health care debate enters a new stage, the opposing camps must now argue about what is, rather than what will be.