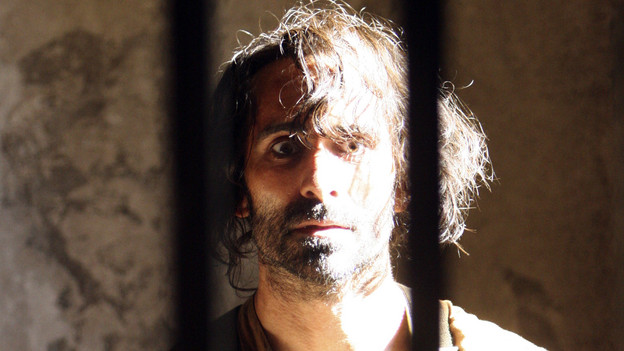 This week LOST packed a punch with a backwards-looking episode, “Ab Aeterno.” Ab Aeterno is a Latin phrase that translates as “since the beginning of time,” an appropriate title since the episode focused on one of LOST‘s most mysterious, seemingly immortal characters: Richard Alpert. Richard, we find, is actually a Spanish convict who came to the island in chains. Richard’s colorful past is revealed, as well as the foundation of his Jacobian existential crisis. Our special guest blogger, Mike Vitullo from LOST Addicts, helps us unpack the episode.

Nikki Gloudeman, New Media Fellow: Hey guys! Mike, thanks for joining, we’re really happy to have you joining us.
Mike Vitullo, LOSTAddicts: Seriously, it’s like the people at work today didn’t realize it was LOST discussion day! Thank you for having me, I’m honored to be invited!
NG: So, last night’s episode… classic?
Ben Buchwalter, Editorial Fellow: My head hurts… again
MV: Easily one of my top five faves.
NG: It actually gave us some answers!
MV: Yes, the Black Rock destroyed the statue! A large wave put it in the middle of the jungle (just like many speculated)… and of course, the Man in Black (MIB) wants to kill the LOSTIES!
NG: Yep, I’m feeling pretty sure MIB is a baddie and Jacob is a good guy, if a slightly douchie one. Or… are they the same person? duh duh duh

BB: Per what Richard’s wife Isabella said, why would everything turn evil if MIB left the island?
NG: One theory is that the sideways world is if MIB left the island (sunken island) which means we might see that world turn dark soon? That would be kind of cool.
MV: Nikki, I have heard the same about the sideways world. Possibly this is the world where the Island was “uncorked!” I have been speculating, and not sure if LOST will go there, what if Smokey got off of the Island? Would he still be a “smoke monster”? Could he terrorize the world like Godzilla or something crazy like that? Kinda would be a bizarre twist for LOST, but I wouldn’t rule it out!
Jen Phillips, Assistant Editor: Or maybe he’d just influence lots of people to be bad. Like, presidents and such.
NG: Political commentary on LOST? I like it.
BB: I like the Godzilla theory

NG: Lots of religious symbolism in last nights episode. The cross necklace, the priest, the wine, etc…
MV: Definitely, like the passage Richard was reading in prison: Luke 4:23 and 4:24. I’m not a theologist but I did reference some stuff in my blog that Entertainment Weekly‘s Doc Jensen had mentioned in prior articles. All about Christ facing Satan in the wildnerness. Deep stuff!
JP: Or what about Christ questioning himself in the garden of Gethsemane?
NG: Initially the show was into various religions, like Bahaii and such, and now its very Western religion.
MV: Very true on the Western, but we can’t forget all of the Egyptian artifacts on the island, e.g. the statue of Taweret. Where did this stuff come from?

BB: We still don’t know much about Jacob and MIB before Richard got to the island.
JP: Right, so Jacob had definitely been there for a while before the 19th century. How long, I wonder.
MV: And of course, just hearing more and more about Jacob and MIB I want to know where their powers come from. We got Richard’s origin story, now I want theirs! How did MIB “lose his body” and become ol’ Smokey? Exactly Jen, how long indeed?

BB: So guys, does MIB work for Jacob? Why does Jacob have to let him leave?
MV: I thought so. I thought maybe Jacob gave him that role as “security system” to defend the island or the temple. Now, I’m not so sure. Maybe that was his original job, but he’s been fed up with it for quite some time!
NG: Makes sense, seems like Jacob does have some control over him, which makes MIB like Juliet… trying to leave but can’t, which makes him a sympathetic character.
BB: I wonder if Jacob and MIB have flash sideways plots.
JP: Ooh, good question Ben!
MV: Here’s something bugging me. In the season five finale, Jacob and MIB are sitting on the beach in daylight with a ship like the Black Rock coming towards them. In last night’s season six episode, we see the Black Rock arrive at night and in a storm…WHAT GIVES?
JP: Well, it’s rarely stormy on the island. So maybe Jacob “helped” them.
NG: Can’t imagine such a blatant continuity error at this point in the game. True, could be Jacob manipulated the storm to bring them in.
MV: There’s the whole Ajira flight arriving too. It was night and then all of a sudden after the flash it was day. Maybe similar?
JP: Time distortion plays a role in this.
MV: Right… good ol Faraday and his light scattering!
JP: Possibly huge chunks of time. This whole thing, the whole series, could be happening in a second or the blink of an eye.
NG: Jen thats a cool theory!
MV: Yep, and then Hurley wakes up in the institution just like his imaginary friend Dave told him! 🙂 (who i still theorize could be Libby’s dead husband David).
NG: Ah, Libby, I really wanted more info on her and I think were never gonna get it. Sad.
JP: So has Hurley always talked to dead folks? Or is this an on-island phenomenon?
MV: He definitely did before Jacob touched him. Hurley wasn’t touched until right before his second visit to the island.
NG: Good question… he talked to imaginary folks before, so not such a stretch…or maybe Dave was actually dead?
JP: Right, maybe they weren’t imaginary. Just dead.

MV: Sorry if I’m sidetracking you guys, I have a lot going on in this head of mine and it’s all LOST!
NG: All lost all the time.
JP: I still don’t get how MIB can impersonate these people who’ve never been to the island. e.g. Linus’s mom, Isabella.
NG: Yes that’s strange, its as if he’s taking it from peoples memories, which is strange, even for this show.
MV: Do we know if Smokey was Linus’s mom? Because I had the same question with ghosts. Most of the ghosts we have seen were people that died on the island or whose bodies (Christian Shephard) were brought to the island. Now Isabella is showing up? And of course Ben’s mother. And the same with Smokey taking the form of Isabella. What was the whole point of bringing Locke’s dead body back to the island if Smokey can take the form of people that died who weren’t on the island? So confused! While it doesn’t look like MIB is a good person, I don’t think Jacob is innocent in this either!
BB: I agree with Mike: we’re going to find out that Jacob is bad too, or at least more complicated than we think.
MV: Jacob has lured all of these people to the island who have ended up dying because of it. But MIB is on a killing rampage on that island, how is that good?
NG: I think we want Jacob (like God) to intervene, but free will dictates that couldn’t and shouldn’t happen.
MV: My ideal end for LOST, take it or leave it, is that our LOSTIES will end up “living together and dying alone” (ahh, Jack!) and disregarding anything that Jacob or MIB have been “conning” them into! I really like how the show ties into all of these religious themes, but I think in the end that it is really important for the show to not go too far and PROVE the existence of a higher power or anything like that. I like that they keep it ambiguous. The ol’ Science vs. Faith thing. Although, I don’t know how you can scientifically explain MIB and Jacob!

BB: I definitely became more confused after last night’s episode.
MV: Me too Ben, but it’s a good confused. I just hope we’re satisfied at the end. I can deal with still being confused, I just want to enjoy the ending. And then on 8/24 I’ll buy the Official Encyclopedia to get my answers! 🙂
NG: Ok guys gotta run, thanks for the chat! Last night ruled, I love this show!
MV: Thanks Nikki, thank you all for the invite. I had a blast!
BB: Thanks for coming, Mike!