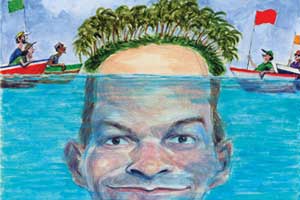 I FIRST MET Srdja Popovic last spring at a bustling café in the Maldives, where he had just helped overthrow the government. Sipping espresso and smoking cigarettes, he spoke in passionate bursts as he told me about how he had guided the local opposition—now the ruling party of this tiny nation in the Indian Ocean—in the ways of peaceful revolt. Yet even with five revolutions already under his belt, Popovic insisted that he sought only to educate rebels, not lead them.

“You cannot take the revolution in a suitcase and take it to one place,” Popovic told me when I caught up with him again in a restaurant in wintry Washington, DC, where he’d been meeting with pro-democracy organizations. Popovic has been credited with giving activists the tools to oust unpopular regimes (pdf) from Ukraine to Lebanon—earning him and his small band of nonviolent storm troopers a name as Che-like globe-trotting agitators. “We have the notorious reputation of being capable of toppling dictatorships all over the world,” he said with nonchalance. “We are the world’s best known troublemakers.”

But that notoriety has also made it more difficult for the tall, sinewy 37-year-old to slip into places where his services might be of use. While he boasts that he’s never been arrested outside of his native Serbia, nor deported or even denied a visa, he acknowledges that there are “a few countries that I would be prohibited to go.” Iran, he says with a smirk, “would love me—for dinner.”

Luckily, Popovic is on the verge of acquiring a place where the world can come to him. If all goes according to plan, this spring a tropical atoll in the Maldives will become home to “Democracy Island,” a campus where activists can study nonviolent resistance amid coconut trees, white sand, and lagoons the color of Cool Mint Listerine.

Srdja Popovic (pronounced sir-JA POP-o-vitch) grew up in Belgrade, the son of journalists. In the 1980s, he got into rock and roll, which in the former Yugoslavia was “subversive in itself.” But it wasn’t until after the fall of communism and Slobodan Milosevic’s rise to power that Popovic got serious about politics. One day in October 1998, he and 10 student activists huddled in a Belgrade café and formed an opposition group called Otpor (“Resistance”). They chose a clenched fist as their symbol. For the next two years, Otpor rallied the silent majority of Serbs to call for Milosevic’s ouster. The regime accused Popovic and his cohorts of being terrorists and agents of the United States. On October 5, 2000, massive demonstrations swept through Serbia (pdf), and Milosevic stepped down.

After that, Popovic won a parliamentary seat in Serbia’s first free and fair election. He advised Prime Minister Zoran Djindjic until his assassination in early 2003. By then, Popovic was growing restless. He wanted to take his brand of popular rebellion on the road. “I am not a politician; I am a revolutionary,” he says. “I see the world as a big battlefield between those who believe in the power of the people and those who try to control the power of the people.”

With another Otpor founder, Popovic founded the Centre for Applied Nonviolent Action and Strategies (CANVAS) in Belgrade. There were already plenty of organizations—the National Democratic Institute, the International Republican Institute, Freedom House—observing voting and focusing on electoral politics. CANVAS offered something new. Instead of talking about civil society and institution building, it drew on the Serbian experience to give pro-democracy activists the nitty-gritty tools for nudging intransigent leaders and, if necessary, toppling governments without firing a shot. It is the only pro-democracy group, says Popovic, where practical knowledge “is transferred to activists by those who have actually achieved freedom through nonviolent struggle.”

CANVAS’s “Core Curriculum” (pdf) has been translated into six languages, including Farsi and Arabic, and its online “canvasopedia” features sections on nonviolent “weaponry” such as sit-ins and strikes. While he and his colleagues work closely with pro-democracy activists, Popovic says that they don’t take to the streets or try to stage-manage events. “We never tell people what to do,” he says. “We only share what was done successfully.”

CANVAS got off to an impressive start, training the pro-democracy campaigners in Georgia, Ukraine, and Lebanon who went on to lead the Rose, Orange, and Cedar revolutions, respectively. CANVAS staff has also worked with activists from Azerbaijan, Palestine, Egypt, Western Sahara, Zimbabwe, and Burma. “It’s made an important contribution,” says Timothy Garton Ash, a professor of European Studies at Oxford and the coeditor of Civil Resistance and Power Politics, a study of nonviolent action. “It is absolutely to be admired and replicated. I’ve seen it myself in Ukraine.”

The Popovic model has also caught autocrats’ attention. In 2007, Venezuelan president Hugo Chavez compared the clenched-fist logo adopted by local student demonstrators with that used by Otpor. (CANVAS has met with anti-Chavez activists, but Popovic says the organization has never worked inside the country.) Following the Orange and Rose revolutions, Belarusian TV suggested that Otpor-inspired forces were conspiring to bring down President Aleksandr Lukashenko (pdf). After one of Popovic’s colleagues was photographed during a fleeting encounter with George W. Bush a few years ago, Tehran accused the two of plotting to take it down.

Popovic is quick to say that CANVAS is “100 percent independent from any government” and funded entirely by private donors. Paranoid regimes don’t buy that, and neither do some American leftists, who have accused CANVAS of being part of a CIA-linked “Imperialist International” that targets Washington’s enemies. “One of the many sad legacies of the Bush era is that people see conspiracies even where there aren’t conspiracies, particularly regarding pro-democracy struggles against regimes the US happens to oppose,” says Stephen Zunes, a professor of international studies at the University of San Francisco who has collaborated with CANVAS in training Egyptian and Western Saharan activists.

Likewise, Popovic says such claims are baseless. Not only would American support jeopardize CANVAS’s nonpartisan stance, but for him, it’s personal: In 1999, NATO warplanes bombed the Belgrade offices of Serbian state TV, where his mother was an editor. She wasn’t there that evening, but 16 of her coworkers were killed. “Do you think I would ever collaborate with the government that tried to kill my mom?” he once asked.

Democracy Island grew out of Popovic’s recent success in the Maldives, where, in 2008, a former political prisoner named Mohamed Nasheed defeated the country’s longtime strongman in a multiparty election held after three years of nonviolent agitation. CANVAS had worked closely with Nasheed’s Maldivian Democratic Party, and in gratitude, the 42-year-old president has agreed to help it and a handful of environmental and human rights NGOs establish a campus in the archipelago.

Besides attracting rabble-rousers, Popovic wants Democracy Island to be a legitimate academic institution where Maldivian and foreign scholars, activists, and politicians can get a master’s degree in nonviolent political change. Nasheed told me that he saw Democracy Island as a place where “like-minded people could come and exchange ideas”—but “everything has to be peaceful.”

Before he left, Popovic drained his beer and leaned toward me. The biggest challenge, he said, is not toppling one tyrant or another; it’s spreading the word of change. Democracy Island is a good start, but he’s just as excited about the potential of online organizing. He noted that during the protests in Iran last summer, dozens of blogs posted CANVAS literature in Farsi. “This is the beauty of the new media. There is no way to control it.”