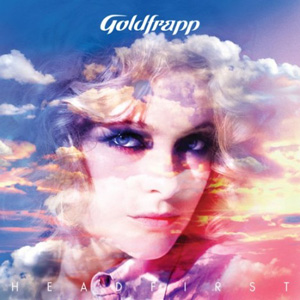 Head First, the fifth full album from Goldfrapp, came out last week, and boy, is it lovely! Who knew late-’70s/early ’80s synth-pop could be so perfectly compact, so life-affirming and seemingly effortless? Anyone who’s ever roller-skated to the Xanadu soundtrack or listened to the full ABBA catalog too many times, that’s probably who. And yet that extremely gay sentence only begins to overanalyze this marvelous new musical emission from forty-something English songstress Allison Goldfrapp and composer Will Gregory. Here’s a list of 10 flowery observations compiled over nearly a dozen listens in varying states of attentiveness:

1. “Rocket,” the first track and first single: So rebelliously joyous in the face of hard-earned world-weariness, it embodies the creamy illusionism of pop, the compulsive, addictive structure that gives three-minute musical confections this aura: melodic, tightly structured, self-contained solutions to reality that are at once outrageously far-fetched, naively enthusiastic, sincere, and disposable. Things not going so well? Send the bastard away on a rocket!

2. Driven by something like an infinitely better, more musically evolved version of Jean Michel Jarre’s repetitive synth-ditty “Orient Express,” “Rocket” is at once moving, silly, and capable of being enjoyed without a thought as to whether or not it’s moving or silly or what. Not to mention it’s the catchiest, happy-go-luckiest song about sending away an irritating lover (possibly) on a rocket. (Oh-oh-oh / I’ve gotta rocket / Oh-oh-oh / You’re going on it / Oh-oh-oh / You’re never coming back.)

3. Like most ABBA creations, so many of the songs (especially “Alive,” one of my favorite tracks, with its bouncing bass piano-line) seem like naturally occurring phenomena almost immediately. As though they had been waiting to be written into existence—and once they’ve been heard, seem to have existed forever. They have the flavor of something completely familiar and yet somehow new, something taken for granted and yet only just now appearing.

4. Even though every homosexual I’ve talked to in the last week says that Supernature will remain their favorite Goldfrapp album thus far, Head First is nothing to shake a stick at. It’s a scream.

5. Embodies now and then—like in the lead-in to “I Wanna Life“—that dire urgency of the decades it draws upon: the sense that life hinges on giving oneself over completely to the sharpness, the narcotic intensity of a fully committed four-minute musical moment.

6. A different part of the Goldfrapp animal: that fantastical, smooth, life-lusting innocence of high-spirited revolt. Rather than trafficking in any sort of nostalgia for the musical language of bygone but recent times, it transports with its simplicity: Ooh-ooh-ooh / Hello hello / Ooh-ooh-ooh / Hello hello / I’m feeling alive again / Alive again. Head First feels less like a maelstrom of references (hi, Lady Gaga) than the triumph of a gruelingly specific, sharply honed sensibility of pop-song craft—lived-in, comfortable, so simple, so familiar, and yet so unexpected as to be surprisingly sublime.

8. “I Wanna Life”: So titled, it has the peculiar effect of creating a verb of “life.” Appropriate for an album so vivacious, so defiant in its obedience to impeccable pop composition. An unselfconscious embrace of what could have been tacky, cold, and fraught with shrill synthesizers, but instead became luscious, warm, captivating in earnest, intimate in its offering up of a pleasure that need not be second-guessed. I wanna life.

10. The final track, a drifty number buoyed by overlayed, staccato samples of Allison Goldfrapp’s voice doing different things—it’s called “Voicething,” for God’s sake—while striking me as the most patently ridiculous song of all, also enchants with its simplicity. In its sheer commitment to artifice, it swirls, hums, and completes itself in a Mozart-like transport of unhurried bliss. Delicious!