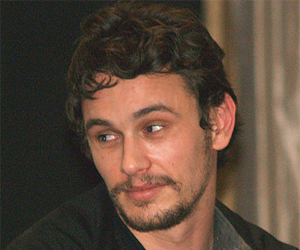 I read with great distress this morning of your plan to matriculate in the PhD program in English at Yale University. This would be where most people congratulate you on your acceptance. But most people are sycophants who mistake fame and physical attractiveness for innate character. I am not one of those people. I’ve known the truth about you ever since you made a campy joke of my alma mater, the US Naval Academy, in an Annapolis performance that by comparison gives Officer and a Gentleman the gravitas and dynamism of an Olivier stage romp.

This Yale thing, of course, would not be your first foray into the hallowed halls of academe. You dropped into UCLA, then dropped out, then back in. You almost gave a commencement speech there, then didn’t. Then you went to my other alma mater, Columbia, for a master’s in fine arts with an emphasis on creative writing, as well as a nap. At the same time, you also enrolled in NYU’s Tisch School for acting.

And now, Yale wants you. To the list of earthly phenomena that mystify me—the riddle of Schroedinger’s cat, the Second Law of Thermodynamcs—I now add this: The Ivies and other top-tier institutions shower degrees on you like so many Sony HD minicams in an Oscar-party grab-bag giveaway. And I must strenuously object. Please read the following appeal:

As a professional writer and reader, as well as a PhD aspirant myself, I know whereof I speak. I even read your recent Esquire short story, a piece of “fiction” which I understand you penned at Columbia. And—I say this with sympathy—it is a typical MFA workshop Frankenstein, a musing on youth, friendship, and death, replete with car crashes, sexual ambiguity, and one-off similes (“the shadows make it shadow-color”; “the black gaping gap”). It’s one of those pieces that you read aloud in class, then insist to your peers at the end that “It’s not autobiographical.” (You didn’t even change the name of Palo Alto, your hometown, for God’s sake. And now that’s the name of your book, too!)

And normally, your peers would tear a piece like that to shreds. But not James Franco: Too many women want to be with you, and too many men want to be with you, too. Your celebrity probably negated any benefit you might have gleaned from the workshop system: The brutal but vital truth that a written line’s rarely as brilliant as the writer imagines. And if you’ve been insulated from the brutal truths this long, brother, you’re either going to have a hard time of it in a PhD program…or you’re going to get pushed through, and that PhD’s worth will be forever tied to the market fluctuations in raw vellum’s value.

Now, look, let me be fair. You are a talented, funny guy, as evidenced by your online “Funny or Die” acting lessons (I’m sorry for the loss of your cat), your SNL appearances, and your performances in the works of Judd Apatow. You have elevated the lovable stoner to its current status as cultural meme, and for that we will be ever grateful. In fact, I can even see a continuity between your acting career and the cultural criticism on which contemporary English departments thrive. Like Lady Gaga and R. Kelly, you are a postmodern star, in on the meta joke of your persona-as-character. You are the simulacrum of the notable person, the sort of unsettling pop presence that leaves doubt in the intelligentsia as to your sincerity, and makes an ironic joke of your fawning fans’ credulity. You are Andy Kaufman. You are Borat. You are Joaquin Phoenix. I get it.

But you are not a frigging aspiring English professor or cultural critic. And if you think you are, then feel free to email me, and let’s slip you into a quickie MoJo interview about your literary influences and interests. ‘Cause I’m sincerely curious.

And Yale, I’ve got something to say to you, too: As an over-degreed member of the creative class, and the husband of an academic, I know you guys are strapped for cash. I know that if someone comes along who’s willing to pay full tuition, you’ll often bend the admissions standards. I know your rationale is that, hey, that’s more assistantship and fellowship funding we can spare for the really talented starving writer.

But for the love of all that’s holy, that’s what master’s programs are for! There are literally thousands of aspiring academics who apply to the top-tier doctoral programs each year; Yale liberally estimates that it accepts 12, which is double the number of most peer programs. Blowing one of those spaces on a guy who can pay his way, but will still occupy space in small-section seminars and colloquia, and will take up the time of a faculty member who’ll supervise his dissertation—all that comes at an opportunity cost to the other hard-working candidates who see their chances of a tenure-track position dwindling.

Not only that, but if you’re willing to admit Franco for the cash, where’s the slippery slope stop? How long before you endow a Coca Cola Distinguished Professorship of Advertising Semiotics? Before it’s the Nokia Yale Journal of Criticism? Sure, you’ll get a short-term bump in notoriety. And if Franco ever decides to do another Spiderman sequel, you’ll get a long-term endowment…and the unscrubbable taint of another Spiderman sequel. So please: Take a step back, and think. You have the power to stop this now.

And if that’s not convincing enough, Yale, there is this consideration, the only one you probably really need: Somewhere out there, Harvard is watching what you do…and laughing its patoot off.