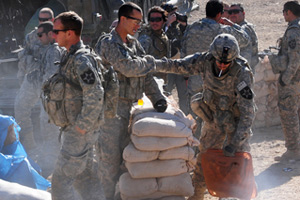 After years of a US presence in Iraq and Afghanistan, rebuilding and stabilization projects remain disjointed and chaotic, resulting in wasted taxpayer dollars and, potentially, the deaths of soldiers and civilians. Meanwhile, the nearly six-year-old State Department office that was supposed to coordinate these efforts isn’t even fully operational. And for that, according to the official who heads the division, Sen. Tom Coburn (R-Okla.) is partly to blame.

As the Obama administration surges soldiers and civilians into Afghanistan, the State Department’s Office of the Coordinator for Reconstruction and Stabilization (known as S/CRS) is a key player in synchronizing the alphabet soup of agencies and divisions involved in the effort. But its effectiveness has come under fire—from Stuart Bowen, the Special Inspector General for Iraq Reconstruction and from members of the congressionally chartered Commission on Wartime Contracting. On Monday, the commission held a hearing on coordination failures and grilled officials from the Pentagon, the US Agency for International Development, and the State Department on their teamwork. Not masking his anger, Chris Shays, the panel’s co-chair and a former Republican congressman from Connecticut, laid out the stakes: “The lack of coordination costs billions and billions and billions of dollars—huge waste, which means that we don’t optimize the dollars that we spend. It also results in the loss of lives in our military, the loss of lives in our diplomatic corps, the loss lives of our civil servants, the loss of lives of our contractors…It’s a huge, huge issue.”

John Herbst, who since 2006 has served as the State Department’s coordinator for reconstruction and stabilization, took the brunt of the criticism at the hearing—faulted, among other things, for his office’s anemic presence in Afghanistan and absence from Iraq. Herbst, a veteran diplomat, acknowledged that coordination efforts have been “problematic.” However, he strenuously defended his office, emphasizing that S/CRS “has only been operational, in the true sense of the word, for only 18 months.”

Though S/CRS was technically established in 2004, the office wasn’t officially authorized by Congress until October 2008—”after four years of trying to get one Senator to lift his hold” on the bill, Herbst told the panel in his prepared remarks. He didn’t name the offending senator directly, but Coburn has previously been identified as the lawmaker who used a parliamentary procedure to block a full vote. Then-Sen. Joe Biden, one of the authors of the bill, even joked about Coburn’s hold during a Foreign Relations Committee hearing in 2008. “Maybe you could go visit in your quiet way, Mr. Secretary, Senator Coburn,” he suggested to former Deputy Secretary of State Richard Armitage, who was testifying. “It would be a very helpful contribution to make.”

Coburn’s objection to the new State Department office was largely about money; he viewed S/CRS as yet another sinkhole for taxpayer dollars, his spokesman, John Hart says. “Dr. Coburn routinely put holds on bills, even bills he supports, if they support new money and are not offset,” he explained. “He believes that we’re on an unsustainable fiscal course and that if we don’t start making hard choices we’re not going to have an economy or even a foreign policy left to defend.”

If only temporarily, Coburn’s maneuver drastically stunted the growth of S/CRS, which was unveiled by the Bush administration in August 2004 as the failures of its post-invasion planning in Iraq were becoming glaringly clear. One of the signature features of the office was supposed to be its Civilian Response Corps, a rapid-response team whose members deploy to areas of conflict and crisis in conjunction with US military or humanitarian missions. At full strength, the corps should have more than 260 active-duty members and 2,000 personnel on standby. There are currently 86 and 558, respectively—and Herbst has characterized this as one of “several monumental strides” made by his office once its funding was no longer held hostage.

Even so, Bowen, the Iraq inspector general, isn’t impressed. He has slammed interagency coordination efforts in general—”there is a system in place that’s not working,” he said recently. And he has pointed to the shortcomings of S/CRS as a significant part of the problem. A report released by his office last week said the division had made “limited progress,” had “yet to realize its potential,” and had been marginalized “within State’s bureaucracy.” Due to these flaws, as well as the failings of other government divisions involved in reconstruction efforts, Bowen has proposed the creation of a new agency—one that would subsume the duties of S/CRS, as well as those of offices within USAID and the Justice and Treasury departments—that would take charge of planning, funding, and managing these missions. (Turf-conscious officials in the Pentagon and State Department aren’t fans of this proposal.) Such an entity, Bowen believes, would prevent the “interagency breakdowns” that have led to the squandering of “hundreds of millions” of taxpayer dollars.

Coburn, a fierce critic of profligate government spending, has frequently attacked the waste of taxpayer funding and the oversight lapses that allow such waste to occur. In May, he was one of three senators who co-authored legislation to strengthen the under-resourced office of retired Major Gen. Arnold Fields, the Special Inspector General for Afghanistan Reconstruction. So, why block an office intended to address this problem? Along with Coburn’s fiscal concerns, Hart says he wasn’t convinced the office would be very effective and worried that it duplicated “other reconstruction authorities throughout the government”—and Coburn remains no supporter of Herbst’s State Department division. As for the ambassador’s finger-pointing, Hart believes it was more than a little self-serving. “I’d take the ambassador’s comments with a grain of salt,” he says. “It is very convenient for people from the State Department to be blaming Congress for their own management deficiencies.”