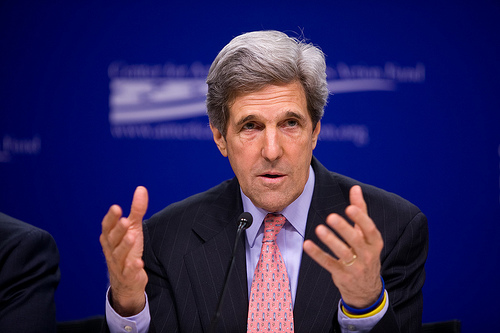 Photo by teh Center for American Progress Action Fund, <a href="http://www.flickr.com/photos/americanprogressaction/3486489321/">via Flickr</a>.

With climate bill negotiations still apparently in a state of chaos, a coalition of 31 environmental groups on Tuesday called on the Senate “not to squander the great promise of bi-partisan action.”

“This must be the year that the United States passes comprehensive climate and energy legislation into law in order to create jobs, strengthen our national security, and reduce carbon pollution,” write the groups, which include the Sierra Club, Environmental Defense Fund, the Center for American Progress Action Fund, and 28 other environmental and progressive organizations. “We can’t afford to delay action any longer; we urge the Senate to take up a comprehensive energy and climate bill in June.”

The groups are hoping to keep the efforts of Sens. John Kerry (D-Mass.), Lindsey Graham (R-SC), and Joe Lieberman (I-Conn.) alive as Graham and Senate Majority Leader Harry Reid butt heads over the timing of climate and immigration legislation. Their rollout of the bill, scheduled for Monday morning, was postponed indefinitely as the authors scrambled to salvage ties with their only Republican ally.

Kerry penned an op-ed last night arguing that the bill remains “very much alive.” On Tuesday he told reporters (via Greenwire) that the tension over timing “obviously has to be resolved” before they can release their bill, and Reid and Graham are “working diligently and appropriately to try to help find resolution.”

To be sure, not all green groups are sad to see this particular piece of legislation falling apart. The bill’s sponsors have been touting the industry support they have for their measure, listing a number of concessions made to please business interests. This has drawn objections from Greenpeace, which last week issued a statement criticizing the bill as a sop to dirty energy interests. “[I]t’s clear that polluter lobbyists have succeeded in hijacking this climate policy initiative and undermined the ambitious action necessary,” said Greenpeace executive director Phil Radford. Other groups, like Friends of the Earth and Center for Biological Diversity, have not outright opposed the measure, though they have expressed concerns about the direction it seems to be headed.