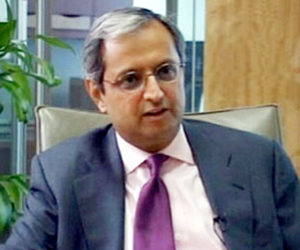 Students and alumni of Columbia University in the City of New York® are raving mad today over the university’s selection of Citigroup CEO/recession profiteer/irrational optimist Vikram Pandit to speak at its upcoming School of International and Public Affairs commencement. Turns out the school’s budding diplomats, civil servants, and aid workers were less than pleased to be sent off into a bleak job market by one of America’s worst captains of industry (if, by “industry,” one means “that steaming load of worthless mortgage-backed derivatives that sent 401(k)’s and hiring levels off a jagged cliff”).

“I certainly did not spend two years of my life at this school to sit for hours at my own graduation ceremony applauding a multi-millionaire bank executive while he lectures myself and my peers about a future to which he and the industry he represents caused grave damage,” one unnamed student wrote on a Facebook bulletin board for the members-only group “We Don’t Want a Bank Executive to Speak at Our Commencement,” according to a student blog. The creator of that Facebook group, Daniel Safron-Hon, praised a series of campus protests staged by his classmates after Pandit’s selection was announced Friday afternoon. “We are not in an attack mode,” he said. “I believe this can be resolved. But the ball is now on the dean’s side. If the school ignores the protests, it’s hard to know what will happen.”

Not that anyone at Columbia (full disclosure: I went there) should be shocked, shocked! to find Citigroup traipsing around the Morningside Heights campus. Pandit—who holds four Columbia degrees—sits on the university’s board of trustees. One of his predecessors, Charles O. Prince, is a trustee of the university’s Teachers College. A scan of the bank’s current executive ranks turns up a number of benefactors to the university, alumni, and professors.

It’s hard to deny that the university has a special relationship with Citigroup: Its ATMs (and only its ATMs) are on campus…where your student ID can double as a Citi bank card, if you enrolled for a student account during orientation…which makes it a lot easier to receive your student loans when they’re disbursed by…who else? Citigroup. In fact, Citi (full disclosure: I borrowed from them, grudgingly) has historically been one of the university’s “preferred lenders,” even after Columbia was forced in 2008 to fire a financial aid administrator who’d been on the dole of one of those same lenders. (In a related investigation, New York Attorney General Andrew Cuomo forced Citigroup to donate millions to a lending-education fund to atone for its student-loan sins.) I knew a lot of classmates who, once graduated, took jobs with Citi or its peer institutions on Wall Street to pay off massive student debts that originated with a Citibank lending arm.

So, bully for the students of SIPA, biting the hand that starves them. Unless, of course, Citigroup starts hiring again. In which case Pandit’s likely to be welcomed with open arms and desperately laser-printed business cards.