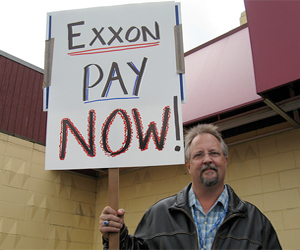 [UPDATE: ExxonMobil’s spokesman contacted Mother Jones to dispute this story, offering additional information concerning its US income tax liabilities for 2009. That information had been added to the end of this post.]

So, good news and bad news. The good news is, oil megacorporation ExxonMobil had such a profitable year in 2009, it contributed $15 billion to the world’s tax coffers.

The bad news: Not a cent of that went to the IRS.

ExxonMobil, the world’s second-largest company, says it actually paid out 47 percent of its profits in taxes, but not to the good ol’ capitalist US of A. Says Forbes in a report on all the taxes of the US’s top 25 firms (with added emphasis):

Exxon tries to limit the tax pain with the help of 20 wholly owned subsidiaries domiciled in the Bahamas, Bermuda and the Cayman Islands that (legally) shelter the cash flow from operations in the likes of Angola, Azerbaijan and Abu Dhabi. No wonder that of $15 billion in income taxes last year, Exxon paid none of it to Uncle Sam, and has tens of billions in earnings permanently reinvested overseas.

By contrast, the nation’s largest corporation, Wal-Mart, paid $7.1 billion globally in taxes, and the lion’s share of it—$5.9 billion, or 83 percent—went to the US government.

The most hilarious part is ExxonMobil still finds a way to bitch about its lot in life. The corporation’s website includes an issues page on “industry taxes,” which threatens that energy innovation is already on the ropes because of excessive taxes, and it will be forever consigned to the dustbin by any new taxes on windfall profits (or, we’d assume, plans like President Obama’s to close the offshore earnings loopholes that saved ExxonMobil from the IRS this year). “While our worldwide profits have grown, our worldwide income taxes have grown even more. From 2004 to 2008 our earnings grew by 79 percent, but our income taxes grew by 130 percent,” ExxonMobil’s flacks wrote, presumably while playing the world’s smallest—and most expensive—violin.

Not that this should shock anybody. In 2008, the New York Times discovered that one in four of the US’s largest corporations regularly pay no income tax to the IRS, and billions are lost. Exxon’s not alone: The Forbes article points out that General Electric avoided paying any income tax last year on profits of $10.3 billion. In addition to offshore tax shelters, GE had another ace in the hole: It submitted a record-breaking 24,000-page tax return. God bless the IRS’s auditors; I’d have paid billions not to have to read that thing.

[Update: Alan Jeffers, ExxonMobil’s media relations manager, contacted Mother Jones to respond to this story, confirming that he had submitted a signed comment on this Web page (see way below). He first sent us an email, which states:

It is incorrect to say that ExxonMobil did not pay any U.S. income tax in 2009. In fact, we expect a significant U.S. federal income tax liability for 2009, although our tax return will not be filed until later this year. Our tax installments overpaid our 2008 U.S. federal income taxes and we used that excess in part to pay our 2009 estimated taxes. The amount stated in our 10-K filing with the SEC, which Chris [Christopher Helman, who originally reported on this story for Forbes] told me he based his story on, includes expenses or credits recorded during 2009, and can represent items from previous years or expectations for subsequent years. It is not our actual tax bill.

In a subsequent phone conversation, Jeffers told Mother Jones he “really had to dig in with our tax guys just to really explain what was going on here.” He stressed that “the activity in that report”—referring to the 10-K, an annual summary of company activity that must be submitted to the Securities and Exchange Commission—“does not represent our tax bill,” which has not been settled, since the company has not yet filed its 2009 IRS return. He added that, just as an individual might see a refund or not have to pay additional income taxes when they file, the firm could conceivably show a surplus or a zero on the “total income tax” line. When an individual gets a refund from the IRS, that doesn’t mean she got off scot-free: It means she overpaid her taxes throughout the year. Jeffers said the same principle operates for ExxonMobil.

Jeffers, however, declined to discuss what ExxonMobil’s actual US income tax liabilities might be—in 2009, or in any year—except to say that it wasn’t zero. “We don’t disclose our tax bill; we’re not required to,” he said. “Just like most corporations and individuals, we disclose what we’re required to.”

Which leaves the figures in ExxonMobil’s 10-K largely unexplained: Even if the firm overpaid taxes and earned a refund, it still wouldn’t show up as a zero or a positive revenue in cashflow—unless the paid tax liabilities are concealed elsewhere in the report. And it doesn’t explain why ExxonMobil’s figures are so out of wack with its peer corporations, like Wal-Mart, cited in the original story above, or Chevron, which listed $200 million in US income tax on the same line in its 10-K, Forbes reported.

In any case, the original story is wrong in this respect: According to the 10-K, a screenshot of which is provided below, ExxonMobil didn’t have a zero-tax liability in 2009; it was actually owed $46 million by the IRS, against $15.1 billion in foreign taxes owed. As Jeffers says, that may not be the case; but it’s what ExxonMobil told the SEC, its shareholders, and the world. And since the firm refuses to share its actual tax numbers with the public, it’s all we have to go by.] 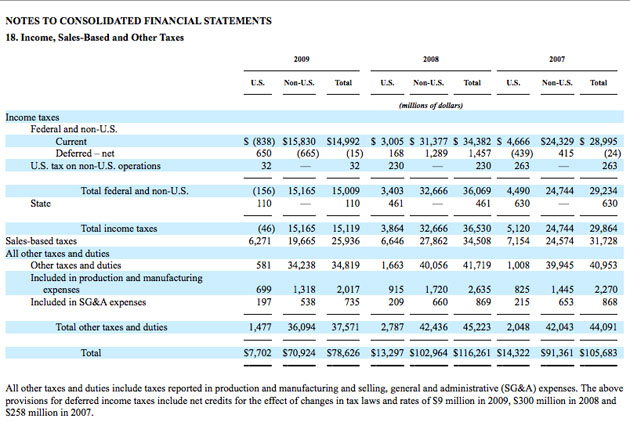