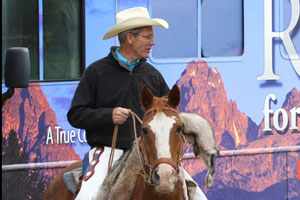 Idaho veterinarian, elk rancher, and political hopeful Rex Rammell first attracted national attention last year when he joked about buying “Obama tags” to hunt the president. Now the conservative activist is running to be the GOP’s candidate for governor of Idaho. His platform? Revving up right-wing militias so they are “prepared” to deal with the growing threats to freedom posed by a federal government bent on “socializing” the country.

On ABC’s “Nightline” on Tuesday, Rammell explained why it’s reasonable for those unhappy with the Obama administration to threaten violence:

“I don’t think anyone would argue that America is getting more and more enemies all of the time—both foreign and domestic,” said Rammell. “I think the way politics is going in the United States and the Tea Party movement—the whole atmosphere promotes people wanting to get prepared. And I think that is what this is about…

“It’s because of the current administration’s politics—the more they force upon the states, the more noise there is,” Rammell said. “The more concern people have, the less freedom there is. Lots of Idahoans believe the health care bill is very intrusive on our individual rights. … We are not going to allow them to come into the state and make what we believe are unconstitutional mandates. Even if they can get them passed in D.C., we are not going to all that to happen. These guys want to show a little force behind the scene… I don’t have a problem with that.”

Show a little force? Was Rammell calling for right-wing militias to try to intimidate the federal government days after the feds cracked down on the Hutaree Christian militia for plotting to kill police officers? Idaho has certainly spawned it own share of militia groups and sympathesizers. Groups like Northern Idaho’s Lightfoot Militia claim to have more than a 100 members, though they insist they aren’t looking for a “showdown” with the government and consult with local officials to make sure they’re above board. But the increasingly hysterical tone of anti-government rhetoric and growing concern about extremism have drawn increasing scrutiny to such heavily armed extracurricular activities.

Rammell himself is a fundamentalist Mormon who has long stood on the fringe of Idaho’s right-wing political scene. He began his political crusade as a property rights activis when the state refuse to license his elk ranch due to inadequate fencing. And he first got a taste of the spotlight in 2006, when over a hundred elk escaped from his ranch, prompting the governor to order a large-scale hunt.

Since then, he has espoused a series of extreme views. “All of the evil empires that have ever existed have dictated what their youth would learn and by whom,” Rammell thunders on his campaign website, slamming the federal government’s role in the education system. A climate change denialist, he argues that those who advocate addressing human-generated global warming are godless fearmongers: “The catastrophic consequences predicted by the doomsayers are evidence of their lack of faith in a Supreme Being who holds the creation and the future of the world in His hands.” He has also called upon the Almighty to help save the Constitution during the Obama years: “We are in America’s second Revolutionary War to save our freedom, which we paid for with blood. We need God’s help and I’m not ashamed to ask for it,” he proclaimed in January, around the same time that he held a series of male-only Mormon campaign events.

Rammell’s extreme views haven’t always endeared him to his fellow Republicans. He ran for Senate as an independent in 2008 and only managed to get 5.4 percent of the vote. Since he launched his primary campaign for the governor’s seat, the state GOP hasn’t rushed to embrace him. And after he refused to apologize for his joke about hunting Obama last year, he came under heavy criticism from state and national Republican leaders, as well as the Mormon church.

The incumbent governor, Republican Butch Otter, is projected to win another term. But Rammell’s entry into the race could still have an impact. Otter has been challenged repeatedly by the right wing of the state party—in addition to Rammell, he has three other challengers in the GOP primary. In response, he has moved to burnish his own conservative credentials—for instance, by making Idaho the first state to sue the federal government over the health care bill. In a crowded primary contest, Rammell’s militia hawkery could gain traction with the Tea Party crowd—and push the Idaho Republican Party even farther to the right. “At one time, that wing represented a minority of the state’s dominant party,” a columnist from the local Lewiston Morning Tribune wrote last year. Now, he noted, “Idaho Republicanism is becoming little different from Rammellism.”