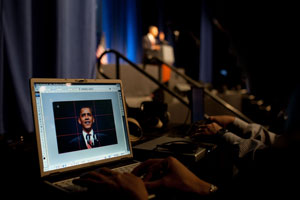 A federal appeals court dealt a major defeat to proponents of net neutrality on Tuesday morning, ruling that the Federal Communications Commission does not have the power to require internet service providers to treat different types of content equally. The ruling strengthens the hand of service providers who want to create “fast lanes” and “slow lanes” for different types of content on the internet. (So-called “net neutrality” rules would prohibit that practice.) President Barack Obama hasn’t reviewed the court’s decision yet, but he remains “committed” to net neutrality, press secretary Robert Gibbs said.

The court fight started last year, when the FCC issued rules aimed at forcing internet service providers to conform to net neutrality principles. But Comcast, a major cable and internet provider, sued to prevent the FCC from enforcing the regulations. Comcast wanted to reserve the right to carry different content at different speeds. The FCC, Comcast argued, did not have the legal authority to prevent Comcast from doing that. A three-judge panel of the Court of Appeals for the DC Circuit unanimously agreed, and threw out a FCC order against the company.

Since the court basically decided that the FCC didn’t have the power to enforce its rules, several Democratic legislators have decided to redouble their push to give the agency more power. Reps. Ed Markey (D-Mass.), Anna Eshoo (D-Calif.), and Henry Waxman (D-Calif.) introduced a bill last year called the “Internet Freedom Preservation Act” that would do just that. “Clearly, the Court’s decision must not be the final word on this vitally important matter,” Markey said in a statement.

The DC Circuit’s decision in this case also draws attention to the two vacancies on its bench. President Obama could have nominated judges to fill those spots, which would have moved the Court’s balance from 6-3 in favor of GOP appointees to 6-5. But the spots, like 103 other judicial vacancies, remain unfilled. (Thirty-eight of Obama’s court nominees are being held up in the Senate, but he hasn’t nominated anyone for the other 65 spots.) Obama has a chance to reshape the federal judiciary if he nominates the right people. But when David Corn asked Gibbs why no one had yet been nominated for the two empty spots on the DC Circuit, the press secretary said he didn’t know.