Here at Mother Jones, we’re all about keeping pictorial tabs on the United States’ ongoing wars. This photo essay is about a different kind of fight, courtesy Geoffrey King and Sunny Angulo’s Such a Bittersweet Day: Marriage Equality in the Wake of Prop 8.

San Francisco City Attorney Dennis Herrera says that this collection of photos and oral histories about California’s marriage equality movement “brilliantly capture[s] the humanity and passion of what is perhaps this generation’s preeminent struggle for civil rights in America.” And what a struggle it’s been, even in just the last couple of years: The California Supreme Court legalized gay marriage, but then Prop 8, which bans gay marriage, passed thanks partly to meddling Mormons, so that now there’s the discrimination within the discrimination that some same-sex couples—those who got in under the wire—can be legally married but others can’t. And of course the battlefield exists way beyond California and beyond just the issue of marriage equality, with casualties like this and this and this every day. 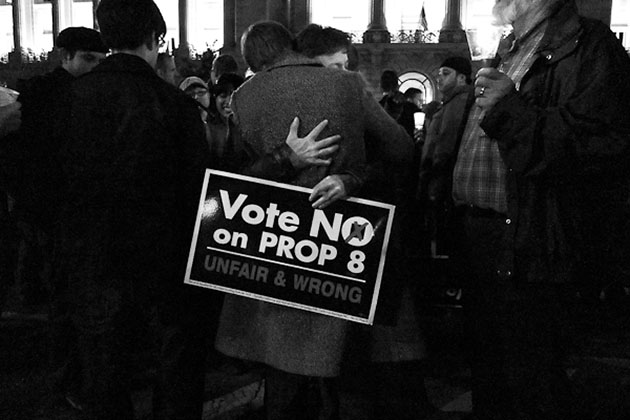 As a large crowd gathered for a candlelight vigil in front of San Francisco City Hall, someone remarked, “It’s such a bittersweet day. Yesterday we elected our first Black president. But then we passed Prop 8.” 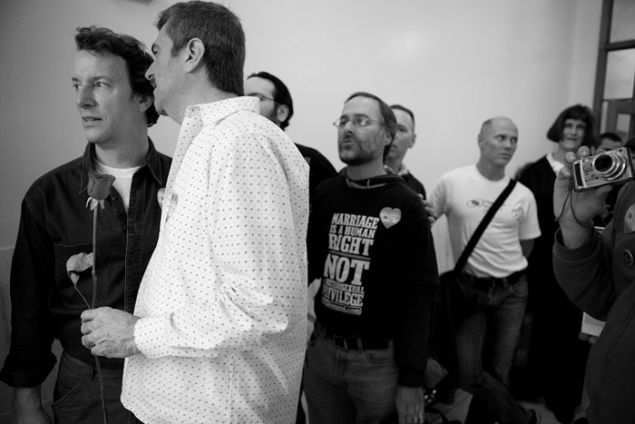 Activists line up at the San Francisco Clerk’s office on Freedom to Marry Day 2009. Their marriage application requests were denied pursuant to Proposition 8. 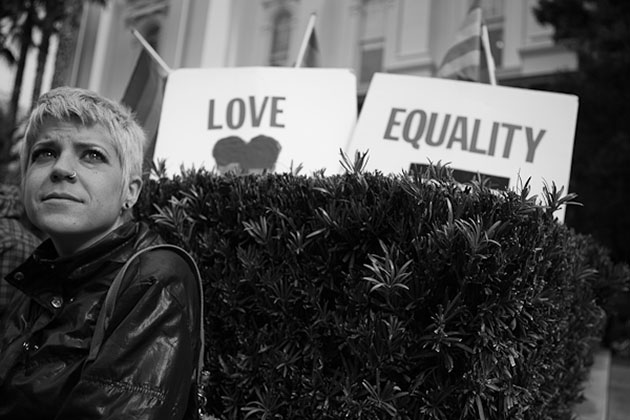 Demonstrators rally for marriage equality outside the California State Capitol in Sacramento. 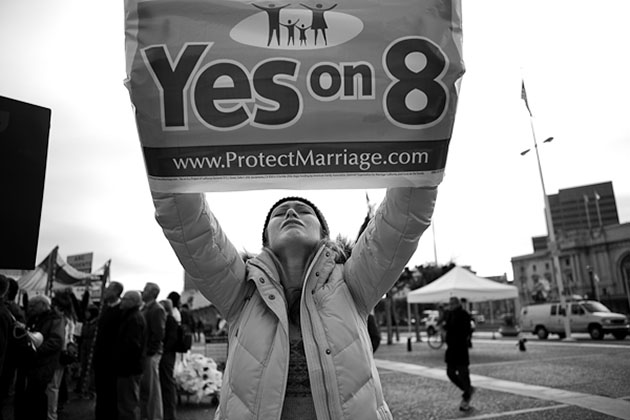 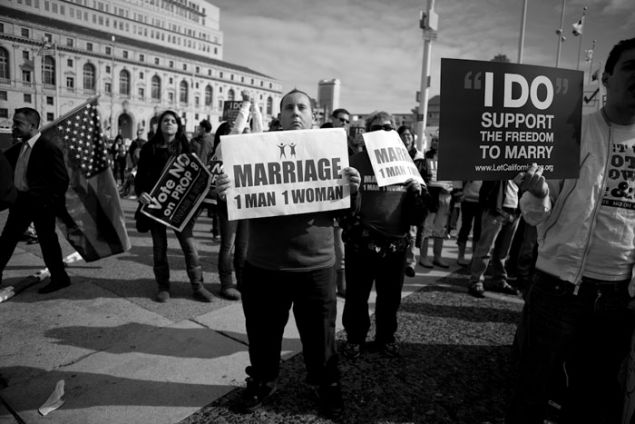 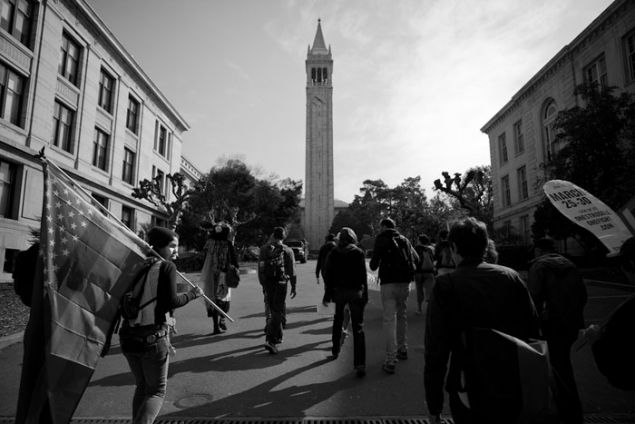 Activists from the grassroots group “One Struggle, One Fight” embark from Berkeley on a fifty-mile civil rights march to Sacramento. OSOF, which formed in the wake of Proposition 8, emphasizes nonviolent direct action and coalition-building between groups across the religious and secular Left. 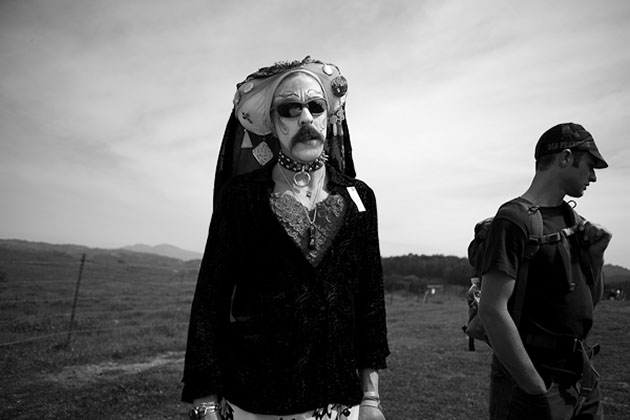 Sister maejoy B. withU reacts to the news that the OSOF march is miles off course on the first day of the march. Sister maejoy marched in full drag on the first and last days of the fifty-mile march to Sacramento. Sister maejoy is a member of The Sisters of Perpetual Indulgence, an order of “nuns” whose mission is to “to promulgate universal joy and to expiate stigmatic guilt.” The Sisters engage in philanthropic work, AIDS education, and other work in the public interest. 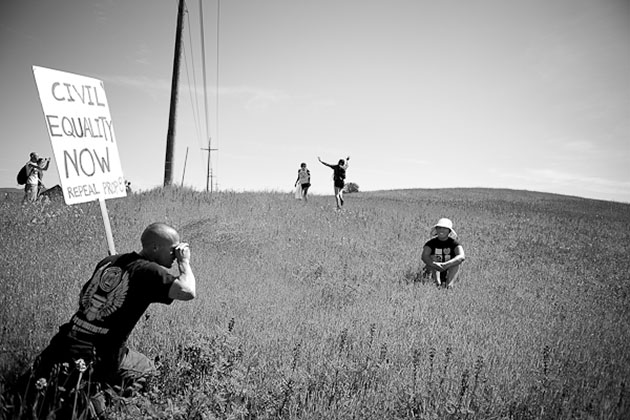 The OSOF leaders’ attempts at maintaining order on the march were no match for this field of wildflowers in Clayton, California. 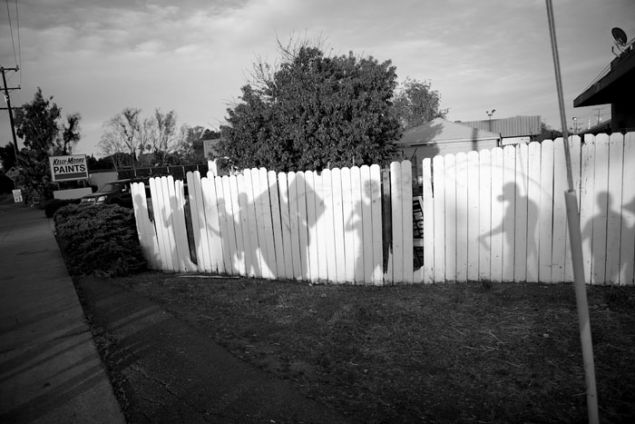 The OSOF marchers reach Antioch, California on the second day of the march. After men in two vehicles were observed surveilling the march and signaling to each other, the decision was made to use support vehicles to shuttle march participants to the next rest location. 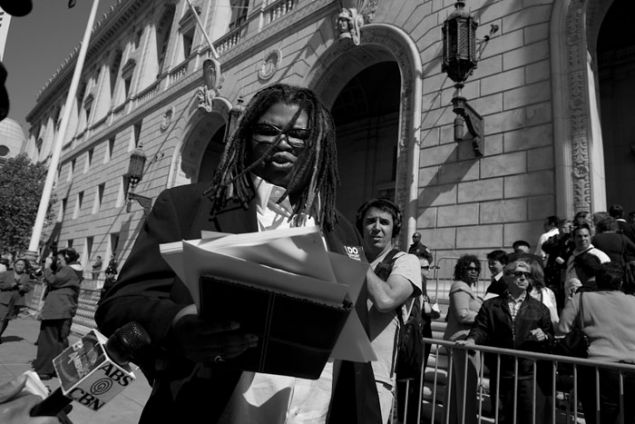 Veteran activist Andrea Shorter announces the decision of the California Supreme Court to the press. The Court upheld Proposition 8 as constitutional under state law, but did not invalidate the approximately 18,000 marriages that occurred prior to its passage. 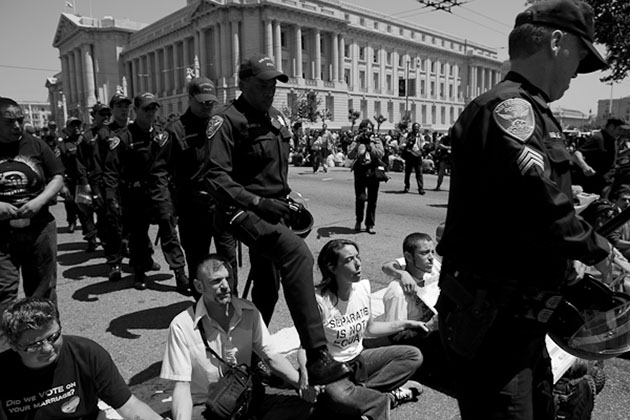 San Francisco S.W.A.T. and other officers move in to arrest demonstrators participating in a civil disobedience action immediately after the California Supreme Court upheld Proposition 8. 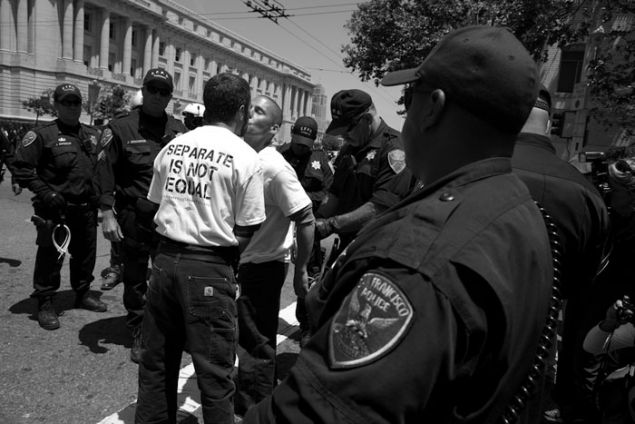 Frank and Joe Capley-Alfano are arrested during the civil disobedience action. Although Frank and Joe are married, Frank’s labor union declined to follow its policy of providing spousal medical insurance, citing the federal Defense of Marriage Act. The union’s position barred Joe from surgeries he needed to deal with complications from a major car accident he was in earlier in life. The union recently reversed its position. 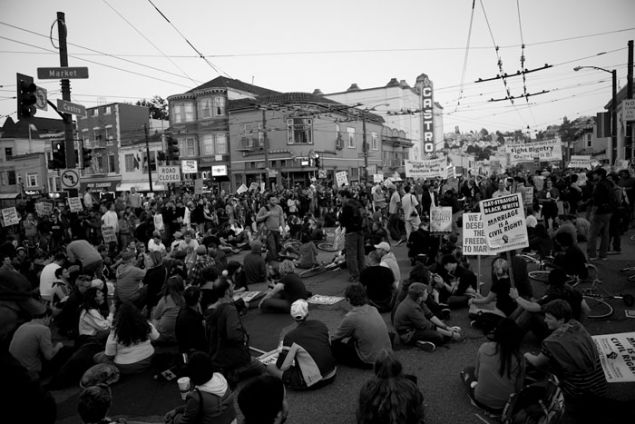 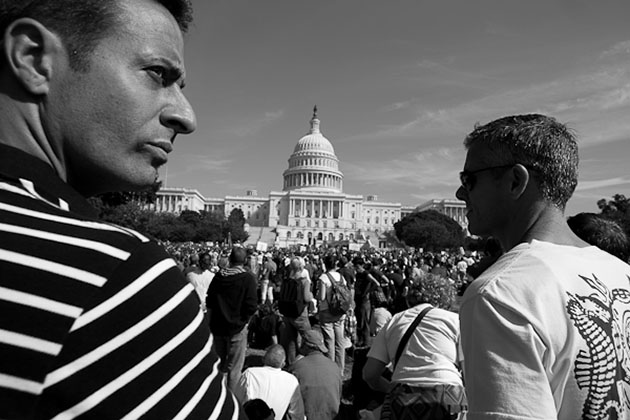 Demonstrators rally following The National Equality March in Washington, DC, which was organized in substantial part by OSOF activists. 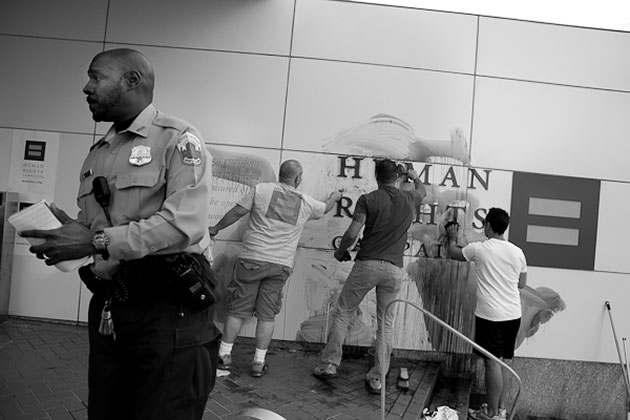 A group called “Queers Against Assimilation” claimed credit for “glamdalizing” the mainstream LGBT organization Human Rights Campaign’s headquarters on the morning of the National Equality March in Washington, DC.