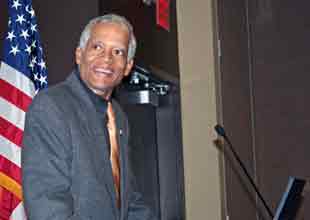 Courtesy of the office of Rep. Hank Johnson.

It couldn’t have been easy for Admiral Robert Willard, the commander of the U.S. Pacific Command, to maintain a straight face during his completely bizarre grilling by Rep. Hank Johnson (D-Ga.) last week. Willard was testifying before the House Armed Services Committee at a hearing concerning his command’s FY 2011 budget. Part of the hearing centered on plans to shift thousands of US troops from Okinawa to Guam. This move is likely to put a serious strain on the tiny island—but not the kind that Johnson is worried about. Take it away, Hank:

My fear is that the whole island will become so overly populated that it will tip over and capsize.

To which Willard, who appears to be stifling a grin, says:

We don’t anticipate that. The Guam population, I think, currently about 175,000, and again, with 8,000 marines and their families, it’s an addition of about 25,000 more into the population.

Earlier, in another cringe-worthy moment, Johnson goes into exhaustive detail about the island’s dimensions, eventually posing this question to the admiral: “I don’t know how many square miles it is, do you happen to know?”

Willard: “I don’t have that figure with me, sir, but I could certainly supply it to you if you’d like.”

Since Willard definitely has more important things to do than Google the square mileage of Guam, I’ll save him the trouble: approximately 212.

Jon Stewart needs to send Johnson a thank you note. You can’t make this stuff up.

UPDATE: Johnson, via his spokesman, responds:

“I wasn’t suggesting that the island of Guam would literally tip over,” said Johnson. “I was using a metaphor to say that with the addition of 8,000 Marines and their dependents – an additional 80,000 people during peak construction to the port on the tiny island with a population of 180,000 – could be a tipping point which would adversely affect the island’s fragile ecosystem and over burden its already overstressed infrastructure.

“Having traveled to Guam last year, I saw firsthand how this beautiful – but vulnerable island – is already overburdened, and I was simply voicing my concerns that the addition of that many people could tip the delicate balance and do harm to Guam.”