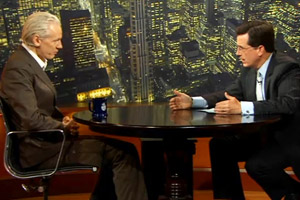 Read the latest on the MoJo-WikiLeaks feud here.

It’s been a very good week for WikiLeaks. Last Monday, the whistleblower site released a classified video shot by an American attack helicopter as it mowed down a group of men on a Baghdad street, two of whom were unarmed Reuters journalists. The video has been watched no fewer than 5.7 million times and the debate over whether it depicts a war crime, a justifiable action, or a tragic example of the fog of war, is still going strong. “WikiLeaks” became a top Google search term as a site once frequented primarily by journalists and activists became a major media player. And the attention seems unlikely to abate soon: WikiLeaks says it’s about to release footage of an American missile strike in Afghanistan that killed dozens of civilians.

Much of the attention on WikiLeaks has focused on its mysterious mastermind, Australian hacktivist Julian Assange. He’s been hailed as a fearless fighter for transparency, but his emergence from the shadows has also revealed him to be as prickly about unwanted disclosures as any of his powerful targets. When David Kushner wrote about Assange’s fascinating blend of passion and paranoia as well as WikiLeaks secretive inner workings on this website last week, Assange fired back, claiming the story was “full of errors” and “extremely irritating tabloid insinuations of the type that might be expected from a poor quality magazine.” Amusingly, his comment has become the most popular one in the history of MotherJones.com, with 43,000 recommendations and counting.* (Assange hasn’t elaborated on the supposed inaccuracies in the article.)

Meanwhile, Kushner’s article has inspired several profiles of Assange, including one in the Sunday Times of London that liberally cribbed quotations and original reporting from his story. Yet WikiLeaks tweeted that it was “mostly, not entirely, correct.” Clearly the Times mostly swiped the accurate parts of our story.

Episodes like this suggest that WikiLeaks’ relationship with the media—and its understanding of its own role as an activism-journalism hybrid—are both fluid and contradictory. The three-year-old site once presented itself as a “completely neutral” conduit for forbidden information. It said it would rely on dedicated readers to do the heavy lifting of assessing and analyzing leaks and then taking action against those whose misdeeds had been brought to light. “WikiLeaks does not pass judgement [sic] on the authenticity of documents. That’s up to the readers, editors and communities to do,” a 2008 version of the site explained. WikiLeaks has since largely abandoned crowdsourcing, relying instead on new and traditional media outlets to repackage its leaks. It’s even toyed with the idea of selling its juiciest leaks to the highest bidder.

WikiLeaks has also cast aside any pretense of neutrality. The Iraq helicopter video was posted on a site called CollateralMurder.com, a decision that an unusually serious Stephen Colbert pressed Assange on when he appeared on the Colbert Report last night. Assange said the title was designed to get “maximum political impact.” What is most striking about this approach is not its sensationalism but its naivete: Why did Assange think that a provocative headline and a fairly sparse website could offer a bulletproof interpretation of a video that raises more questions than it answers, even after multiple viewings? As director Errol Morris wrote about the Abu Ghraib photos—images that many saw as photographic slam-dunks but told a more complex tale—”It is easy to confuse photographs with reality.”

Another intriguing aspect to the WikiLeaks media blitz is that it’s happening a a time when its “uncensorable” repository of leaked documents has gone dark. The hundreds of documents housed on the main WikiLeaks website and its mirror sites have been offline for more than four months—rendered virtually inaccessible not by the Pentagon, Scientology, or other vengeful foes, but by WikiLeaks itself. As part of a $600,000 fundraising drive, the organization is essentially holding its trove of information hostage until users pony up. The Iraq helicopter video has helped fill its coffers; WikiLeaks triumphantly tweeted last week, “Raised >$150K in donations since Mon. New funding model for journalism: try doing it for a change.” Hopefully that means the old site will be up and running again soon, ready to show the world what it can do with its newfound notoreity.