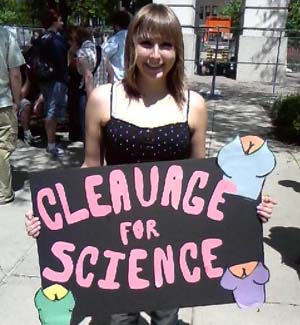 Last week, Iranian cleric Hojatoleslam Kazem Sedighi claimed that scantily-clad women were responsible for earthquakes: “Many women who do not dress modestly…lead young men astray, corrupt their chastity and spread adultery in society, which (consequently) increases earthquakes.” Sluts! They never rest. Especially not Jennifer McCreight, who is fighting this claim with an immodest proposal. And she’s not alone. Introducing Boobquake, an international call-to-arms for women to dress provocatively to prove Sedighi wrong. Boobquake has taken the Internet by storm (pun unintended), flooding (sorry!) Twitter with pictures of cleavage, trending under the hashtag #boobquake with over 56,000 Facebook fans…and numerous news outlets and blogs reporting on the breastivities.

McCreight’s mission for Boobquake is as follows:

On Monday, April 26, I will wear the most cleavage-showing shirt I own…I encourage other female skeptics to join me and embrace the supposed supernatural power of their breasts. Or short shorts, if that’s your preferred form of immodesty…With the power of our scandalous bodies combined, we should surely produce an earthquake. If not, I’m sure [Sadeghi] can come up with a rational explanation for why the ground didn’t rumble.

But then, an earthquake hit Taiwan, which didn’t bode well for Boobquake participants. McCreight followed up with a blog post, saying, “No, the Taiwan earthquake is not statistically significant—yet. If we get many of a similar magnitude in the next 24 hours, then we might start worshipping the power of immodesty.”

You might ask, how is flooding the internet with pictures of boobs different than any other day on the Internet? You would, of course, be correct, but today’s boob pictures are for science!

“[T]o the scientists who are concerned with my methods—don’t worry, I fully plan on doing some statistics after the event. I know many earthquakes happen on a daily basis, so we’re looking to see if Boobquake significantly increases the number or severity of earthquakes. Or if an earthquake strikes West Lafayette, IN and only kills me, that may be good evidence of God’s wrath as well (I’m not too concerned). And yes, I know I need a larger sample size to make this good science. Maybe I’ll include Mardi gras in my calculations,” McCreight wrote last Wednesday.

Though McCreight claims that Boobquake’s aim is not “serious activism that is going to revolutionize women’s rights, but just a bit of fun juvenile humor,” the Boobquake phenomenon has turned into a moment for activism. On Boobquake’s Facebook page, McCreight is selling (surprisingly unrevealing) tank tops whose proceeds will all go to the Red Cross and JREF. She also encouraged fans to consider donating money to the AHA Foundation, an organization that strives to “defend the rights of women in the West against militant Islam.”

McCreight will be providing updates on Boobquake throughout the day on her Twitter feed…and we can all be sure that if the world is destroyed by boobs, Twitter will be the first to know about it.