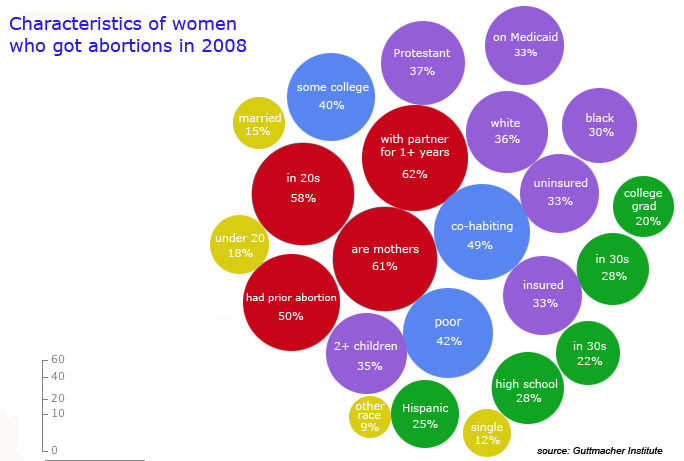 Data visualization tool by <a href="http://manyeyes.alphaworks.ibm.com/manyeyes/">ManyEyes</a> 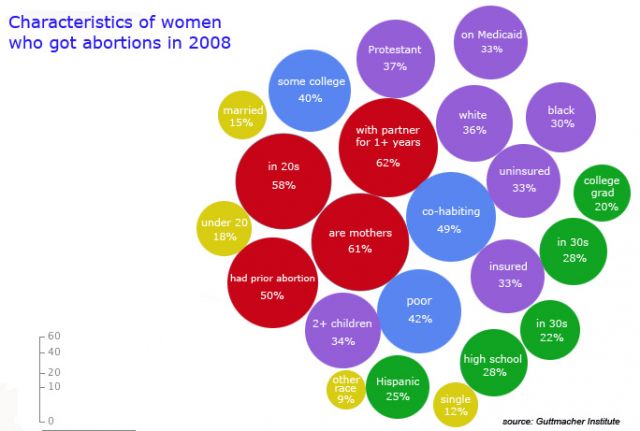 Click for largerA new report by the Guttmacher Institute shows that poor women in the US make up a higher proportion of those getting abortions than they did eight years ago. From 2000 to 2008, the number of poor women in the general population (which is defined as having a family income that’s 100 to 199 percent of the federal poverty level) has increased 25 percent, but the number of poor women getting abortions has risen 56 percent. Currently, 42 percent of all women getting abortions are poor. “Because of financial constraints, women want to delay childbearing or limit the number of children they have,” the report said, “but these same financial constraints have made it harder for them to access contraceptives and to use them consistently.” The entire results of the study are summarized by the chart, left.

Sadly, this is a familiar tale not just in the US but around the world, as Julia Whitty reported in her May/June cover story for Mother Jones. More than 200 million women worldwide do not have access to contraceptives, many of them in developing countries. In the largely Catholic Philippines, for example, the government stopped providing contraceptives to poor women in a country where the average yearly wage is around $3000. As Whitty wrote:

“Easy access to contraception would reduce those births by 800,000 and abortions by half a million each year. Furthermore, it would deliver a net savings to the government on the order of $16.5 million a year in reduced health costs from unwanted pregnancies, including the brutal medical consequences of illegal back-alley abortions.”

Even in the US—a rich country, especially in comparison to the Philippines—contraceptive access has gotten more difficult with the recession. Two-thirds of government-funded family planning centers in the US reported an increase in women seeking contraceptives from 2008 to 2009. But just as need has increased, nearly half of family planning clinics reported they had layoffs or a hiring freeze, and a third said they’d had to cut back on more expensive (but longer-term) methods of birth control like IUDs or implants.

Curiously, despite the disparity in access to contraceptives, nearly half of all pregnancies are unplanned in the US and the Philippines. In the US, 40 percent of those unplanned pregnancies end in abortion; that’s 1.21 million a year. The average abortion costs $413, so altogether abortions cost around $500 million a year, $284 million of it paid “out-of-pocket.”

And 61 percent of US women gettting abortions are already mothers, meaning they aren’t the only ones paying this bill: Their children are, too.