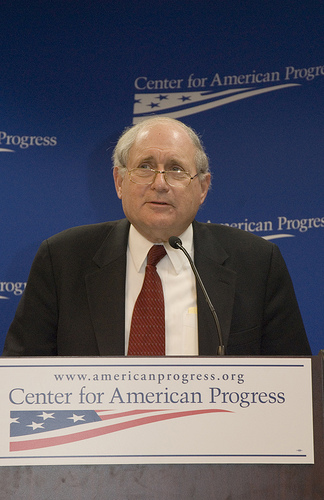 In Washington, usually the longer lawmakers haggle and debate and offer amendments to a piece of legislation, the weaker the bill gets. On financial regulatory reform, a group of Senate Democrats today touted plans to buck that trend and improve the Senate’s bill that would reimagine the guidelines and regulations of our financial markets.

In an afternoon press conference, Sens. Carl Levin (D-Mich.) and Jeff Merkley (D-Ore.) introduced an amendment to break off banks’ proprietary trading desks—the riskier operations where traders bet for their own company’s gain, not for a client. The Levin-Merkley amendment draws on the “Volcker Rule,” a provision popular with the Obama administration that would redivide investment and commercial banking. The Levin-Merkley amendment would ban banks from making high-risk investments involving bonds, stocks, derivatives, and other financial products; it would also block them from sponsoring or investing in hedge and private equity funds, both riskier operations that lie outside the purview of federal regulators. Levin-Merkley would also try to eliminate the conflict of interest inherent in a firm like Goldman Sachs, which both advises on and executes trades for clients while also investing to pad its own bottom line. The conflict of interest is at the heart of SEC’s ongoing securities fraud suit against Goldman. “Maybe we can’t stop the extreme greed that lies behind these conflicts, but we can act to end the conflicts which have allowed big payoffs,” said Levin.

Meanwhile, Sen. Jack Reed (D-RI) is another Democrat looking to beef up the financial reform bill. Reed said that an amendment he introduced today will crack down on the hedge, private equity, and venture capital funds that operate almost entirely unregulated. In Reed’s amendment, all private funds will be required to register with the Securities and Exchange Commission. (The existing Senate bill requires funds larger than $100 million to register, with exemptions for certain types of funds.) Reid told Politico, “This amendment will shut down loopholes and provide the SEC with long-overdue authority to examine and collect data from this key industry.”

While both amendments boast Democratic support, it’s unclear whether they can garner 60 votes. Last week, an amendment from Sen. Ted Kaufman (D-Del.) and Sherrod Brown (D-Ohio) that would’ve capped the size of banks and the leverage they use, seen by many as an improvement to the bill, fell considerably short, 60-33. The Senate resumes talks on the financial bill tomorrow, and soon enough we’ll see whether these amendments have the support or not.