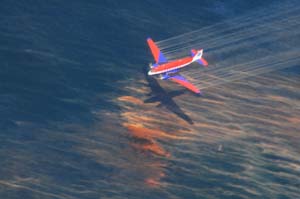 This week, lawmakers are grilling BP executives and government officials about the devastating oil spill in the Gulf of Mexico. But they should be asking tougher questions about the recovery effort, too. BP’s critics say the company is spraying hundreds of thousands of gallons of harmful chemical dispersants into the Gulf when less toxic options are available. Which raises the question: Why is the Obama administration allowing a company whose poor safety record led to the spill make crucial decisions on the chemicals used for the clean-up?

Dispersants are compounds used to break down oil into smaller globs so that it sinks and biodegrades more quickly. The two primary dispersants being used in the Gulf are Corexit 9500 and Corexit(R) EC9527A—compounds created by an Illinois-based company called Nalco. According to the Deepwater Horizon Joint Information Center, the unified command office set up to deal with the spill, approximately 600,000 gallons of dispersant had been deployed by Sunday, most of it sprayed over the spill site from the air. Last weekend, the Environmental Protection Agency (EPA) gave BP the green light to apply dispersants directly at the source of the spill—the first time this method has been used.  BP has stockpiled a third of the world’s supply of dispersants; Corexit comprises the vast majority of this supply.

But environmental experts have warned that Corexit could add to the ecological disaster in the Gulf rather than alleviate it. Oil companies designed the dispersants to reduce the amount of oil hitting land. That may spare BP the PR nightmare of oil-coated birds washing up on Louisiana’s shorelines. However, as scientists such as marine toxicologist Dr. Riki Ott point out, BP’s chosen dispersants will simply push the problem underwater. The chemicals, says Ott, have “the potential to cause intergenerational harm” to marine life.  Corexit has been banned in the United Kingdom due to environmental concerns.

“[Oil companies] want to make the visible part of the oil spill disappear—for political reasons, for limiting liability to the spillers,” says Richard Charter, government relations consultant for Defenders of Wildlife Action Fund.  “If we were looking at food chain impacts and biomagnification in the marine ecosystem, we probably never would have invented Corexit.”

There are more effective alternatives available, though not in as large a volume as Corexit. One, called Dispersit, outperformed Corexit in EPA tests, dispersing 100 percent of South Louisiana crude oil, the type spilling into the Gulf. The two Corexit compounds only managed to disperse 55 and 63 percent of the oil, respectively. Dispersit is also far less toxic, according to the EPA’s data. The manufacturer, U.S. Polychemical Corp., says it could produce 60,000 gallons of Dispersit per day if the EPA approves it for use in the Gulf. “They say they’re going as fast as they can,” says U.S. Polychemical president Bruce Gebhardt. “I keep waiting for my phone to ring.” He adds, “Nalco has always been the largest player on the block, and Corexit has always been what’s been stocked.”

So why is BP sticking with Corexit? The answer may be Nalco’s close relationship with major oil firms—including BP, as Greenwire reported last week. In 1994, Nalco and Exxon’s chemical division, Exxon Chemical Company, formed a joint venture focusing on oil and gas products like the dispersants in use in the Gulf.