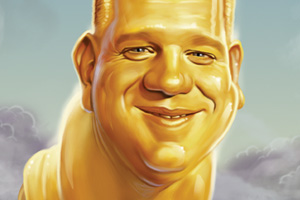 “Goldline rips off consumers, uses misleading and possibly illegal sales tactics, and deliberately manipulates public fears of an impending government takeover – this is a trifecta of terrible business practices.”

Beck shot back on his show, accusing Weiner of McCarthyism. “This is again another arm of this administration coming out to try to shut me down,” he railed on his radio show.

As it turns out, Mother Jones has also been investigating Goldline’s practices and found much of what Weiner turned up and more. (Read the full investigation here.) We discovered that Beck has been “recommending a company that promotes financial security but operates in a largely unregulated no-man’s land, generating a pile of consumer complaints about misleading advertising, aggressive telemarketing, and overpriced products.” Many of those sucked in by Beck’s pitch to call Goldline, and who ended up losing money as a result, were elderly, disabled, and sometimes both. One disabled truck driver who found Goldline after listening to Beck invested nearly 20 percent of his life savings in the company’s gold coins, only to discover that he had paid almost double the price of gold for the coins. It would have been years before he had any reasonable chance of recouping his money, and there was a good chance he’d never make it back. What’s not clear, however, is whether anything Weiner is proposing would do much to help these folks.

Weiner has asked both the SEC and the Federal Trade Commission to investigate Goldline for what he described as unfair and deceptive trade practices as well as for representing itself as an investment company, even though it’s not licensed as such. But it’s unclear whether those agencies will be able to do much. The SEC, for instance, told me that its main regulatory tool, the Investment Advisers Act, only applies to people recommending securities, not coins, and that it didn’t have jurisdiction over this kind of thing. The FTC may have more authority to act in cases of deceptive practices, but Goldline has been very savvy about covering itself to avoid any such actions by having its salespeople run through a standard menu of disclosures during phone calls.

Through the Freedom of Information Act, we dug up a pile of complaints people have made to the FTC dating back to 2006 outlining the same practices Weiner is calling on the agency to investigate, but the FTC never acted on them. And Weiner’s announcement that he plans to introduce legislation requiring more disclosure on pricing and fees, etc., among coin brokers isn’t likely to impact Goldline, which already discloses what a bad deal its coins are right on the phone and in its written materials. The problem is that people simply don’t understand them, and they don’t get a chance to read the fine print before giving out their credit card numbers over the phone and placing a big order. (Goldline helpfully tells people in its investment kits that they really shouldn’t go into debt to buy gold, but then says they are happy to take credit card orders.)

This might be one case where the government would do better to let the private sector solve the problem of protecting consumers. Weiner should sic trial lawyers on Goldline. Despite all of the complaints about the company’s practices, there have been scant few lawsuits filed against it on behalf of aggrieved customers. Given the number of complaints, you’d think trial lawyers would be all over the company. But they haven’t been, probably for a couple of reasons. One, Goldline’s sales materials contain an arbitration clause requiring customers to bring any civil actions before an arbitrator hired by Goldline, a system that pretty much stacks the deck against consumers by limiting damaging discovery and keeping people away from juries. But two, the amounts of money involved in the alleged Goldline rip-offs are relatively small. The largest I found was about $200,000, but most were more in the $30,000 range or less. While that’s a lot of money for the consumer, it’s not quite enough to justify legal fees that could easily amount to double that.

Weiner could remedy this problem by reviving an old feature of state consumer protection laws that allows the victims of unfair and deceptive practices to recover two or three times what they’ve lost, plus attorney fees, thus creating an incentive for lawyers to take these cases. And of course, arbitration clauses would have to go. That’s not to say that federal legislation wouldn’t help, but given that Goldline had more than 50,000 customers over the past three years, doing something meaningful for consumers would require a lot more resources, not just new laws. The FTC has only about 200 lawyers, with a large portfolio that includes everything from anti-trust work to dealing with the do-not-call registry. There are 60,000 trial lawyers in this country. Many of them would no doubt be happy to take on the job. After all, they are usually not big Beck fans, either.