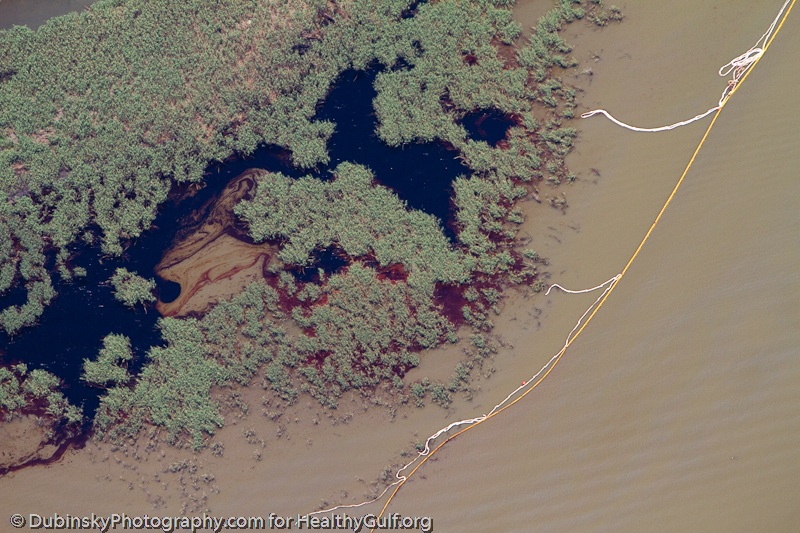 President Barack Obama is down in Louisiana today, where he toured an oil-covered beach and got a briefing from the Coast Guard on the response effort. But he was met there by local environmental groups that believe the federal government needs to take control of the clean-up, rather than letting BP direct it.

I talked with Jonathan Henderson, an organizer with the Gulf Restoration Network, by cell phone as he stood waiting for Obama’s arrival, holding a sign that read “Clean up the Gulf.” He says what he’s seen of BP’s response on the shoreline is “appalling.” “They’re basically doing window dressing,” he said. “If they’re doing everything they can, we’re in deep, deep trouble.”

Henderson says there’s not enough man power deployed. There’s not enough boom protecting the wetlands, and even where there is, it’s not actually stopping the oil; the slick just washes over the booms. Rather than letting BP send its contractors out, they should be writing checks to the federal government so it can send its own response teams, he said.

The Gulf Restoration Network and other local conservation, sportsmen, and Native American groups on Friday called on Obama to federalize the clean-up. Those efforts, the groups said, should be controlled by the government alone – not, as Obama described it yesterday, by BP with the oversight of the federal responders. The groups also called on the government to make all the data related to the spill publicly available, rather than relying on BP to do it, and for an immediate stop of the use of dispersants “unless and until federal and state natural resource scientists agree on their safety for people, wildlife and habitat.” The groups also argue that a military commander should replace the Coast Guard in heading up the federal response, as ocurred after Hurricane Katrina.

National groups are also calling on the government to take over. “The government needs to assert itself much more forcefully in this response,” said Larry Schweiger, head of the National Wildlife Federation. NWF staffers in the Gulf this week found that BP has been grossly underestimating the amount of impacted wetlands. While the company says 30 acres are affected, a fly-over indicated that it’s more like 3,000 acres.

Obama has tried to assure the public that the government is in charge, both in today’s visit and in yesterday’s press conference. But his remarks Thursday indicated that the federal government remains in more of a supervisory role. BP makes decisions, and the federal responders jump in as they see fit:

I guess the point being that the Coast Guard and our military are potentially already in charge, as long as we’ve got good information and we are making the right decisions. And if there are mistakes that are being made right now, we’ve got the power to correct those decisions.

But why are they still letting BP make the decisions in the first place? And why would anyone assume that we’re getting good information from the company? Obama acknowledged yesterday that it’s not in their interest to give us the whole truth:

Well, BP’s interests are aligned with the public interest to the extent that they want to get this well capped. It’s bad for their business; it’s bad for their bottom line. They’re going to be paying a lot of damages, and we’ll be staying on them about that. So I think it’s fair to say that they want this thing capped as badly as anybody does. And they want to minimize the damage as much as they can. I think it is a legitimate concern to question whether BP’s interests in being fully forthcoming about the extent of the damage is aligned with the public interest. I mean, they — their interest may be to minimize the damage and, to the extent that they have better information than anybody else, to not be fully forthcoming.

From what people on the ground there report, BP is not doing an adequate job, and neither is the government in pushing them to shape up.

“We’ve seen first-hand that BP does not have the capacity, organization, experience, or understanding of how to keep the oil out of our coast,” said Cynthia Sarthou, executive director of the Gulf Restoration Network.